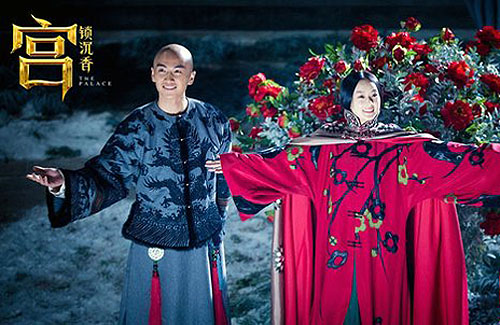 After the success of television dramas Palace <宮鎖心玉> and Palace II <宮鎖珠簾>, screenwriter Yu Zheng (于正) returns to the Qing Dynasty with the movie version of The Palace <宮鎖沉香>. Starring mainland Chinese actors Chen Xiao (陳曉), Zhou Dongyu (周冬雨), and Zhao Liying (趙麗穎), The Palace is scheduled to open in theaters on August 13.

Although many people will immediately connect the movie to the similarly named television series, The Palace has actually very little to do with the two time-traveling dramas. Rather than focusing on the squabbles and feuds between concubines, The Palace will focus instead on Yinxiang, the thirteenth son of Emperor Kangxi, and the political upheavals and love stories of his youth.

Set in the final years of Emperor Kangxi’s reign, The Palace will reconstruct the succession battle among his sons. This period of history has been adapted many times for both television and film, most notably in the 2011 drama Bu Bu Jing Xin <步步驚心>, but most of them focus on Kangxi’s fourth and eighth sons. In contrast, The Palace will revolve around the Yinxiang, allowing viewers to witness how he gained the appreciation of Emperor Kangxi and how he was framed by the ninth prince.

Even though he portrays the thirteenth prince, male lead Chen Xiao shared that he himself is partial toward the fourth prince, who will be played by mainland Chinese actor Lu Yi (陸毅).

“I feel like [the fourth prince] is the character with the most depth, and you can unearth the most things about him,” said Chen Xiao. “It would be very satisfying to act him.” However, he added that if he were to act out an emperor, he would choose Emperor Qianlong, the son of the fourth prince, because he was “the most outstanding and casual, and would often go out in casual dress to inspect the country. Therefore, filming would be rather easygoing, like going on a tour.”

Alongside the political struggles is the love triangle between Yinxiang and two palace maids, Chenxiang (Zhou Dongyu) and Liuli (Zhao Liying). Yinxiang and Chenxiang fall in love at first sight, but Liuli hatches a plan to make the prince think that she is his beloved instead. Even though she is threatened by Liuli, Chenxiang remains at Yinxiang’s side.

As a newcomer to the big screen, Chen Xiao was understandably nervous about his first collaboration with starlet Zhou Dongyu, who shot to fame in 2010 when she was cast in Zhang Yimou (張藝謀)’s Under the Hawthorn Tree <山楂樹之戀>. Because she portrayed a pure and sweet young girl in Under the Hawthorn Tree, Chen Xiao figured that she would need to be looked after on the set of The Palace. During filming, however, he learned that Dongyu’s personality was like a male’s, and they experienced no barriers at all when communicating with each other.

Chen Xiao was also surprised by his other female co-star, Zhao Liying, with whom he had collaborated three times. “I never thought that Liying’s performance this time would give me an entirely different experience. She’s always played cute and kind-hearted girls, but she suddenly became shrewd and extremely wicked… as if she’d changed into a completely different person.”