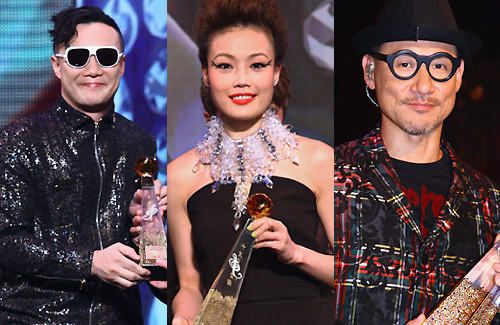 The 35th Top Ten Chinese Gold Songs Awards, simply known as the RTHK Top Ten, was held in the Kowloon Bay International Trade & Exhibition Center on January 20, 2013. Hosted by Radio Television Hong Kong (RTHK), the RTHK Top Ten has been a major music award ceremony for the Chinese pop market ever since its first establishment in 1978.

Winners of the RTHK Top Ten are determined by audience vote and radio airplay.

A total of 49 awards were distributed that night. Hong Kong’s Eason Chan (陳奕迅) and Joey Yung (容祖兒), winning Outstanding Pop Singer and Best-Selling Singer together, were the biggest winners of the night. The Top Ten Chinese Gold Songs Award also gave out twelve awards instead of the traditional ten.

Jacky Cheung (張學友), however, took home the ceremony’s most prestigious award – the 35th Anniversary Honorary Award to recognize his lifetime contributions to the Chinese pop industry and culture. Jacky previously won the Golden Needle award in 2000.