Jacky Cheung and Eason Chan to Collaborate on New Single 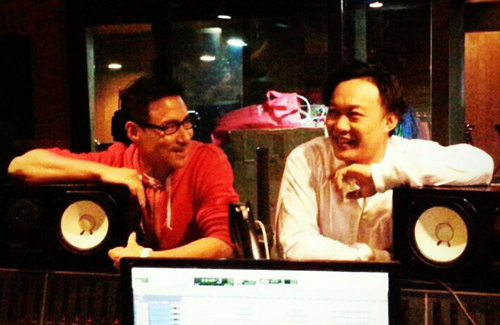 Jacky Cheung has been wooing Hong Kong music fans with his smooth vocals and catchy pop hits since his debut in 1984. The singer earned the nickname “God of Songs” (歌神) and remains active in the Hong Kong music industry, revered as one of the “Four Heavenly Kings” (四大天王) of Chinese pop music.

A decade after Jacky’s debut, Eason Chan took the stage in 1995’s New Talent Singing Awards and belted out Jacky’s song “Gazing at the Moon” <望月>. Eason won first place that night and was rewarded with a music career full of solid albums and major music awards. Critics quickly named Eason as the next “God of Songs”, believing he has the talent and potential to follow Jacky Cheung’s legacy.

The two “God of Songs” have shared the stage in the past, and will cross paths once again this year. RTHK radio station DJ Brian Chow (周國豐) revealed on Weibo a photo of Jacky and Eason in the studio. The two are said to be recording a theme song for Hong Kong government’s “Hong Kong: Our Home” campaign. The project aims to promote social awareness and to raise enthusiasm and solidarity among Hong Kong citizens.

According to Brian’s Weibo post, the song is titled “Love of Those in the Same Boat” <同舟之情>. It is written by acclaimed composer Joseph Koo (顧嘉煇), who had penned many classic TVB themes over the years, and Eric Kwok (郭偉亮), a contemporary songwriter who has composed and produced hit songs for artists such as Hacken Lee (李克勤), Charlene Choi (蔡卓妍), and Kary Ng (吳雨霏). The lyricists include Abrahim Chan (陳詠謙) and the late James Wong (黃霑).

It has been further revealed that the song will include four lines from Roman Tam’s (羅文) classic “Under the Lion Rock” <獅子山下>, which may explain the presence of Joseph Koo and James Wong in the credits.

Eason seemed thrilled to join his idol in the sound booth. On Weibo, Brian included a message from Eason describing his experience. “Everyone always said that I am [Jacky’s] successor. This time I am not coming after him, we are actually working together! Seeing him lose himself while recording, I can’t help but sneak a peek.”