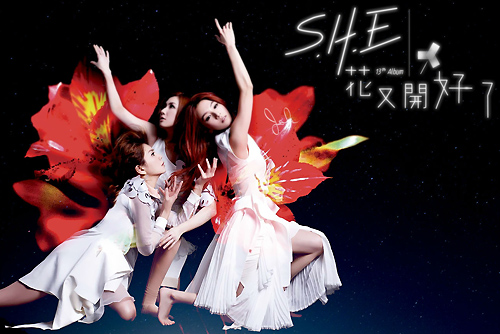 “New MVs” is a new weekly feature at JayneStars.com in which the hottest new music videos from Hong Kong, mainland China, and Taiwan will be profiled and reviewed for their entertainment value and the songs for their vocal power.

This week, the latest hits from pop groups are the focus. Fast tracks from S.H.E. and Grasshopper’s new albums have been heating airwaves and become fast favorites. Controversial mainland Chinese pop group, Mi2, is setting tongues wagging with its age-defying love story.

One of Taiwan’s most successful girl groups, S.H.E. has churned out another crowd pleaser, “Flowers Have Blossomed Again,” which was released on November 13. With Selina and Ella both 31 years old and Hebe turning 30 next year, S.H.E. has grown up and “Flowers Have Blossomed Again” celebrates their maturity spectacularly. Close-ups of the trio’s fashionable strutting, glossy hair, and smoky eyes fill most of the frames, while their flower-like dance adds to more of the song’s metaphor. Although the MV and music composition do not break any new ground in creativity, the song is very pleasant to listen to.

Although Grasshopper’s (草蜢) current output has slowed down significantly compared to their prolific 1990s era,  fans will be happy to know that they never lost their rhythm. Grasshopper’s lead vocalist, Remus Choi (蔡一傑) demonstrates his talent to the rapping of Softhard <軟硬天師>, still Hong Kong’s coolest rap duo.  Dance track, “First Row,” is all about the beat and nonsensical lines such as, “Stand up, stand up, stand up…make a human wave!” will make you grin foolishly. Male fans will be happy to see the irrelevant bikini bodies in the MV.

Mi2 pushed the outrage button when group member, 24-year-old Zhang Muyi (張木易) announced his love for 12-year-old Miki Ayama in September. Muyi was hired to teach Miki how to sing when she was 8 years old, in which he eventually fell in love with the Japanese-Chinese-German beauty. Muyi and Miki formed Mi2 so that they can release music and face love and life together. Muyi announced on social networks, “I can’t wait for the next 4 years to pass,” when Miki will turn 16 years old. Miki in turned promised to marry Muyi when she grows up.

Composed and written by Muyi, “Courageous Love” presents Mi2’s age-defying love story to the public. The MV aims to be romantic and centers on the theme of an angel coming to life, but it is unsettling to watch Miki attempting to look grown up while belting, “I love you” towards Muyi, who has adoring eyes fixed on her.