Since her debut in 1983, singer Priscilla Chan (陳慧嫻) captured many hearts with her wholesome image and a stream of popular hits. Her popularity soared after the release of her classic single “Thousands of Songs” <千千闕歌> in 1989, and survived a long career break when she decided to pursue her college degree in the United States. After the lackluster sales of her last album, Loving Knots <情意結>, in 2003, Priscilla decided to continue her education and retreated from the Hong Kong music scene. Since then, she appeared only at private functions and concerts overseas.

On Tuesday, Priscilla surprised fans by announcing her full return to the Hong Kong music industry. Dressed in a chic white jacket and showing off her slender leg in a black open-side skirt, 47-year-old Priscilla looked enthusiastic and as youthful as ever.

At the press conference, Universal Music Group announced that they have revived Priscilla’s old record label PolyGram. Priscilla has agreed to a three-year contract and signed on as the label’s first artist, giving her “Top Sister” status.

Priscilla expressed excitement over the rebirth of PolyGram and admitted it is a major deciding factor for her comeback. “Re-opening PolyGram is my biggest reason for signing this contract. I was swayed when I heard the news. It is my nostalgia for my old label, my ‘loving knot’. I have always been with PolyGram, and have never left. Those were very happy times. I feel safe returning to my old record label.”

Priscilla further explained that she felt it is the right time to release a new album. “[This year] is the 30th year since my debut, and 10 years since my last record. Because of these reasons I feel that I should release a new Cantonese album.”

Priscilla added that she is planning an anniversary concert at the Hong Kong Coliseum, but it may not happen this year. She revealed that the Coliseum informed her last month of several available dates in August. Priscilla and her production team want to give fans a spectacular show with lots of surprises, and feel that there is not enough time to perfect it before August. Priscilla promised that she will continue to work with her team and the Coliseum to establish new concert dates possibly next year.

When asked to comment, Priscilla defended her retro hairdo. “[Alan] doesn’t know this is ‘high fashion’! He doesn’t know that this is actually called the ‘Vidal Sassoon Hair’ and it is this year’s trendy cut. I really like this hairstyle because I’ve had this hair when I was in 2nd grade!” 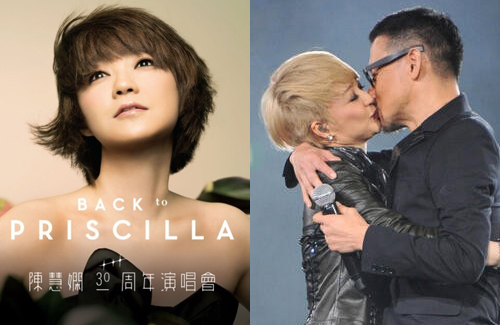