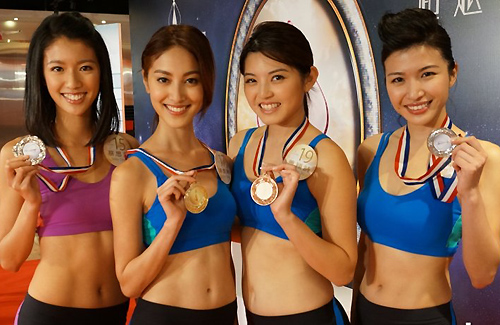 To lure in viewers, TVB has added a brand new segment for this year’s Miss Hong Kong Pageant Semi-Final, which will take place on August 25. The 20 contestants will face a panel of “Celebrity Voters” made up of Carol Cheng (鄭裕玲), Nat Chan (陳百祥), Hacken Lee (李克勤), and Eric Tsang (曾志偉), and will be drilled about their negative news and gossips that have surfaced recently. During the live broadcast, the candidates will be tested on their responses and quick wit, and will be judged on whether they truly possess both beauty and wisdom.

The ladies participated in a fitness competition yesterday, showing off their smiles and cleavage while running on treadmills and riding exercise bikes. There have been many rumors surrounding the contestants since their names were officially announced in July. While gossips were taboo in the past, this year’s new segment will surely raise the show’s entertainment value while highlighting some of the more controversial candidates.

To get a sense of what the contestants are up against, #1 Kendy Cheung (張敬仁) was once rumored to be bisexual and has had plastic surgery. Contestant #6 Moon Lau (劉佩玥), who was once under the same talent manager as Dada Chan, was said to cuss very often. Popular contestant #9 Virginia Lau (劉溫馨) was earlier accused of wearing counterfeit clothes, although she later denied the allegation. Contestant #11 Summer Ng (吳瑋雯) apparently smokes and has kissed a girl. Contestant #17 Grace Chan (陳凱琳), who has won three awards so far, was reportedly living with an adopted father though she later clarified that she is living with her biological parents. Contestant #18 Cherry Cheung (張雪瑩) was seen performing on a mainland television show and was accused of flirting with the audience. Cherry later admitted to singing on the show but denied acting out-of-bounds. Contestant #20 Vicky Chan (陳偉琪) also made headlines for skewing the polls by rallying her friends and family to vote for her.

Finally, the most controversial candidate is likely #13 Tammy Ou Yang (歐陽巧瑩). Aside from plastic surgery claims, Tammy is also accused of working at night clubs and acting intimate with men. She also made news for taking out high interest private loans, using her classmates as guarantors. Tammy initially denied the rumor but later admitted to taking out loans due to a family emergency. She added that she was never late on payment.

This week, Tammy is involved in yet another gossip headline when a source claimed that she is a smoker and used to work as a model for private photo shoots. Tammy addressed this rumor at today’s event, saying, “It is true that I have modeled for a friend, but it was completely voluntary and I did not receive any pay. They are normal photos, not sexy at all.” When asked about her smoking habit, she stated, “I don’t smoke anymore. I tried it when I was younger, but I don’t remember when. When I was young, if I see a pea on the ground I would pick it up and eat it. Once I even ate a stone. Smoking was something that I picked up accidentally.”