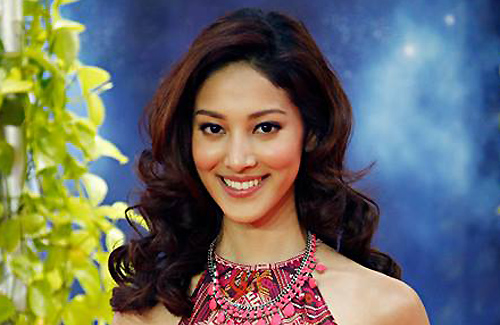 The 20 candidates of the 2013 Miss Hong Kong pageant attended a debate competition held in a shopping mall at Diamond Hill on August 15. Though contestant #10, Michelle Liem (林伊麗), shocked the audience when she blurted out a word that sounded like profanity, #13 Tammy Ou Yang (歐陽巧瑩) came to the media’s attention after tabloids published reports of her rumored financial scandal. The rumors indicated that Tammy once refused to return the money she borrowed when she applied for a multi-level marketing job years ago.

Asked if she had offended someone in the past, Tammy said, “I never thought about that, but it doesn’t matter. I’m innocent. I’ve said this many times – I will only admit to the things I’ve done. If I didn’t do it, I would definitely refute it. I will not be a hypocrite. I’m not afraid of what others say about me.”

Was she worried that her negative rumors will impact her chance to win in the pageant? She said calmly, “I’m not afraid. I am confident with myself and I will not be let down by such news. I’ve anticipated many things to happen since the first day I turned in my application. Some things happen; some things don’t. Am I afraid that I will be fouled out? Not at all.”

At the debate function that day, #17 Grace Chan (陳凱琳) stood out among the crowd with her intelligent responses and strong voice.  She ultimately won the “Current Favorite” award, an award chosen by the audience. This is her third award after winning “Tourism Ambassador” and “Media’s Favorite” at earlier Miss Hong Kong functions.

Grace said, “Maybe it’s because my dad was also here today to support me, so I was not as nervous.”

The final round for the 2013 Miss Hong Kong pageant will be held on Sunday, August 25.