34 Year Old Sammy Sum is in His Golden Years 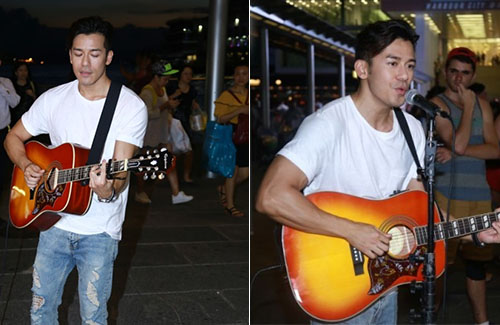 After spending a few months in Mainland China to shoot a television drama and a web film, singer-actor Sammy Sum (沈震軒) returned to his home base in Hong Kong to record the music video of his upcoming single, “Undefeatable” <打不死>. The 34-year-old left TVB in 2016.

Asking if his trip to Mainland China last year was to “dig for gold”, referring to higher-paid contracts that China would offer to Hong Kong stars, Sammy originally denied, but then clarified, “[The price was] okay. My main reason [for doing the dramas] was to expand my horizons. It’s interesting have to speak Mandarin all the time. I’m very happy that I get to try so many different things.”

Asking if he has saved enough money to purchase his own home in Hong Kong, he said, “Real estate prices are really expensive here, but I do want to save more money for it. I also want to use the money I saved to invest in my work. I want to keep learning. I plan to go to Korea soon to learn more about dance and music.”

At the mention of his former agency TVB, Sammy expressed his desire to slow down his work output to “think things through”. He shared his desire to reconsider his options, and think about what he should do in the future. “I am already 34 years old, and these are the golden years for a man. There are so many things I’m considering to do. There’s going to be good news soon, and I will let everyone know about it then.”

“Undefeatable” is Sammy’s first song since providing the theme song for TVB’s Short End of the Stick <公公出宮> last year. Sammy composed the song himself. “It’s a very positive song, and I hope everyone can look forward to my work in music.”

Currently unmanaged, Sammy is in negotiations to sign with a new agency. He will make the announcement in one to two months.