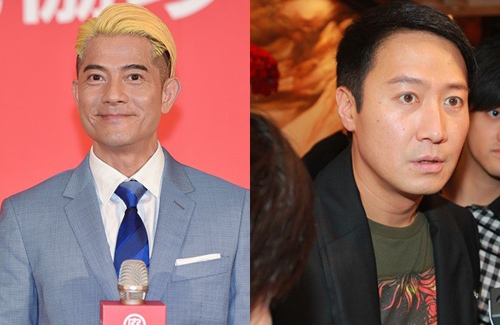 Yesterday, Aaron Kwok (郭富城), his pregnant wife, Moka Fang (方媛), and their daughter attended Hong Kong Jockey Club Racecourse to support his new horse named after his song, “Dancing Spirit”. When he and his family arrived, they were surrounded by many fans hoping for a picture. During this time, a fan called Aaron by the name of Leon (黎明), which left the crowd with laughter.

Before the family arrived, the paparazzi was already waiting for Aaron’s arrival. Moka was wearing a beautiful red dress that displayed her belly bump while Aaron escorted her carefully. Their assistant was carrying their one-year-old daughter, Chantelle, as they walked into the racecourse.

An excited fan approached Aaron and asked, “Leon, can I take a picture with you? Good luck!” in which he responded with a smile, “My name is Aaron”. Though Aaron was mistaken for another Heavenly King, it did not ruin his mood and in the end, his horse won second place in the race.

In the past, Chen Kun (陳坤) also experienced the same misunderstanding in which many fans called out “You’re so handsome Yang Kun (楊坤)!” He immediately corrected his fans, which made them laugh.

5 comments to Aaron Kwok Gets Mistaken for Leon Lai