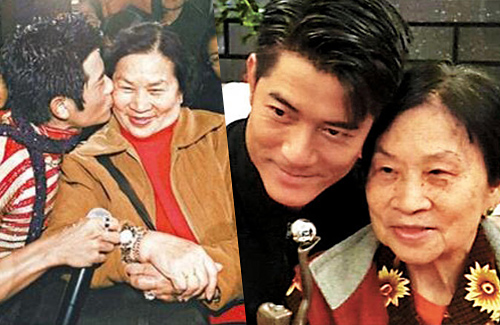 With Aaron Kwok’s (郭富城) mother passing away on February 7, he has been busy planning for the funeral and mourning for his late mother. Aaron revealed that the funeral will be held on March 4 at the Hong Kong Funeral Home.

Known for always having an extremely close relationship with his mother, Aaron voiced his worry for his mother’s health during his concert in January. In her 90s already, his mother’s health was deteriorating daily and he was scared that she may leave him soon. Choking back tears, Aaron exclaimed, “If there’s no Mom, there’s no me.”

At least Aaron was able to fulfill his mother’s wish of wanting to see him get married and have children.  In 2017, Aaron married Chinese model, Moka Fang (方媛), after she became unexpectedly pregnant. The couple has two young daughters, Chantelle and Charlotte. Since becoming a father, Aaron is a changed man and would always go home to have dinner with his family after work and play with his children.

Speaking on behalf of the singer, Aaron’s manager Siu Mei (小美) said that he is currently planning the funeral with his family. Aaron thanks everyone for their concern and condolences.

Aaron Kwok is a Changed Man After Having Daughter, Chantelle