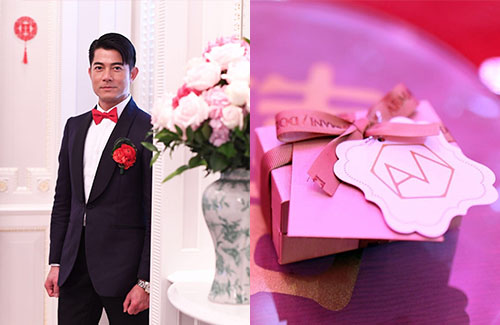 51-year-old Aaron Kwok (郭富城) and 29-year-old Moka Fang (方媛) have finally tied the knot in a low-profile, yet lavish wedding ceremony held at The Peninsula Hong Kong on Tuesday, April 18. The couple only invited close family and friends to the ceremony, filling up 8 tables.

Aaron’s groomsmen included fellow actor Chilam Cheung (張智霖), choreographer Sunny Wong, fashion retail giant Sham Kar-wai (沈嘉偉), designer Dorian Ho (何國鉦), Tam Kwok-ching (譚國政), and concert producer Jack. Security was tight at the wedding, and the newlyweds arrived at the location via helicopter. Reporters were prevented from filming the venue, but a quick glimpse inside showed that Aaron and Moka had went for a romantic rose wedding theme. The tables were decorated with red flowers, and utensils were gold-plated.

Despite the tight security, some details of the wedding were leaked online. There was a live broadcast of Aaron and his groomsmen playing door games and welcoming the bride. The couple had their cake-cutting ceremony around 8 p.m. Both Aaron and Moka were in tears during their signing ceremony. The MC of the event shared that Aaron got drunk at his bachelor’s party the previous night.

The couple thanked each other’s parents during their speeches, and Aaron was emotional when he thanked his mother. Moka’s father allegedly said to Aaron, “Big Brother, I grew up listening to your music. Now I’m handing my daughter to you. Please take good care of her.”

After taking Moka’s hand from her father, Aaron’s close friends tried to get Aaron to kiss her. Aaron said, “Now? But that’s too soon!”

Aaron’s agency has released several photos from the wedding. The first featured Aaron with his groomsmen, and the second was a wedding portrait. Aaron had his arms around Moka, deliberately covering her belly. Several hazy photos from the wedding were leaked online, which showed Moka looking about 5 months pregnant. The couple hasn’t responded to these pregnancy rumors.

Aaron’s manager Siu Mei (小美), Sunny Wong, and Tam Kwok-ching greeted the reporters on behalf of the newlyweds. Siu Mei approached Moka’s pregnancy rumor with caution, and stressed that she doesn’t know if the couple are expecting.

“To be honest, I didn’t ask,” she said. “I promise that I will let you all know when I know.” (Is it because she’s still in her first trimester?) “I don’t know if there is that possibility but I promise to let everyone know once I find out.” (Have people been pushing them to have kids?) “When [his] mother gave them their lucky money she told them to be happy and start working!”

On Aaron’s reasons for holding his wedding at The Peninsula Hong Kong, Siu Mei said, “When Aaron held his 50th birthday party at [The Peninsula], his birthday wish was to settle down. This has finally come true.” 28 comments to Aaron Kwok and Moka Fang Tie the Knot