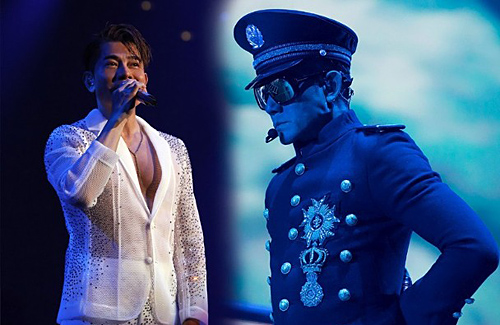 After spending Lunar New Year at home with his family, Aaron Kwok (郭富城) flew to the United States to perform his first concert of the year in Las Vegas at the MGM Grand Garden Arena on February 1.

It is a prestigious arena where Lady Gaga, Jennifer Lopez, and Beyoncé have also performed and can seat an audience of 12,000. This is Aaron’s second time in Las Vegas after 10 years and the tickets were sold out early on. He is very happy that he has many fans from different states and countries to support him.

Aaron braved the cold weather and rehearsed in a thin stage outfit, but it was worth it as the fans had a great time at his show. The fans waved star-shaped light sticks throughout the show creating a beautiful sea of stars. When Aaron sang “Love Sharing” (分享爱), he created a slightly chaotic scene as he threw limited edition t-shirts into the audience and many rushed forward to grab them.

Even though Aaron is in the United States, he is still very concerned for Hong Kong and hopes that everyone can work together to combat the coronavirus outbreak. The next stop for his concert “Aaron Kwok de Aa Kode” will be in Connecticut.