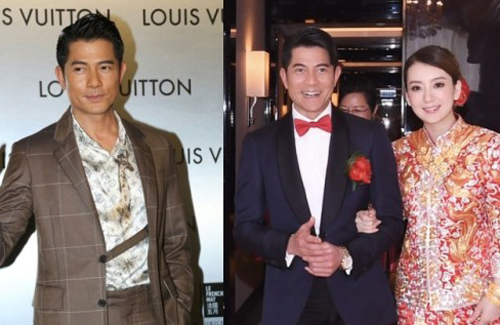 Aaron Kwok (郭富城) hasn’t made the announcement yet, but the media is pretty sure that his baby daughter is already born.

In April, the 51-year-old actor and singer married model Moka Fang (方媛), who was at the time already a few months pregnant. According to media sources, Moka already gave birth to their daughter on September 1 at the Hong Kong Sanatorium & Hospital, and according to Oriental Daily, their baby girl weighed 5 lbs 10 oz at birth.

There’s been contradicting reports in regards to Aaron’s daughter. Some sources claimed that Moka and their baby girl were discharged from the hospital on September 5; Aaron and his team escorted them out of the hospital late at night to avoid being seen. Another source denied that claim, stating that Moka and their daughter are still hospitalized.

Aaron has kept quiet about his private life ever since his marriage to Moka back in April. Although their pregnancy was an open secret, Aaron never admitted to it. Despite his filming schedule, Aaron took great care of Moka during her labor; an assistant was by her side 24/7, and they stayed at the one of the more expensive private rooms in the hospital. A postpartum helper was already hired. Allegedly, Aaron postponed his work and stayed by Moka’s side on the day she gave birth to their daughter. According to a source, Aaron was supposed to have a costume fitting for his new film on September 1, but because of Moka’s labor, Aaron postponed the schedule.

Reporters reached out to Aaron’s good friend Chilam Cheung (張智霖), who responded, “I have many friends who became fathers recently.”