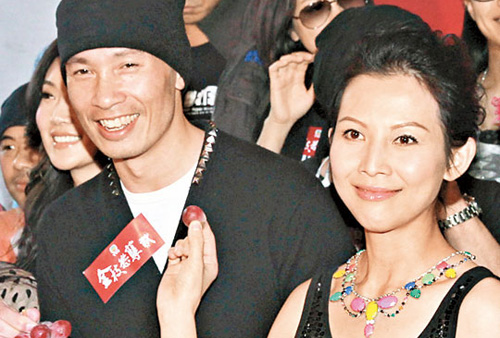 Moses arrived 40 minutes late to the prayer ceremony, whereby everyone waited for his appearance to start the event. He apologized profusely in forgetting that the prayer ceremony was held yesterday, offering to treat cast and crew members to coffee and snacks. Moses dropped 20 pounds in his weight recently, which made his face appear more chiseled.

Since Moses’ girlfriend, Aimee Chan ( 陳茵媺), was currently filming The Confidant 大太监 (previously known as The Great Eunuch) in Hengdian, China, he was asked whether he offered her any advice to stay away from social dinner gatherings. Moses noted that attending dinners was a normal social gesture.

Earlier, Moses announced that his coffee shop in Malaysia had already closed, whereby the shop did not last even one year since its grand opening. Moses had partnered with a friend to open the coffee shop, but ended the venture due to differences in management decisions. However, Moses did not give up his coffee dream and hoped to open another coffee shop in Hong Kong, in which he hoped Aimee will be the female shop owner at that point. Extremely happy in his relationship with Aimee, Moses promised to give Aimee a title two years later, hinting at marriage.

Ada Choi Has No Time To Rest

War and Beauty 2 marked the first drama that Ada Choi agreed to film since becoming a mother. Her 10-month-old daughter, Zoe, just started walking. Despite the excitement of the daily developments for a baby at this stage, Ada spent very little time with Zoe since filming War and Beauty 2. Filming consecutively for the last four nights, Ada admitted that she was mentally very tired.

Due to the story taking place in the Qing Dynasty palace, the dialogue was even more difficult to remember. Since filming, Ada has received “flying papers” or last minute changes to the script.  Ada said, “The scripting changes were ready last night, which made me nervous. After arriving home, I had to start memorizing the script immediately. My daughter came over to hug my legs, but I had to read the script and did not have time to play with her.” Ada indicated that she was used to producer Jonathan Chik and scriptwriter Zhou Xuming (周旭明) making last minute script changes, thus will have to stretch her adaptive and memory skills in order to follow appropriately.

Christine Ng Unaccustomed to Working Before the Camera

Resuming acting after taking a one-year hiatus to manage her beauty business, Christine Ng admitted there was an adjustment period in working before the camera again. She joked, “My last name is ‘Ng’ thus everyone cannot blame me for having NGs (outtakes)!” Christine had an agreement with other cast members that if mistakes were made, no one would be sour-faced and become upset. The filming atmosphere has been pleasant to-date.

Jayne: Looking forward to new sparks in War and Beauty 2 among the cast members. This may allegedly be Jonathan Chik’s last production at TVB.