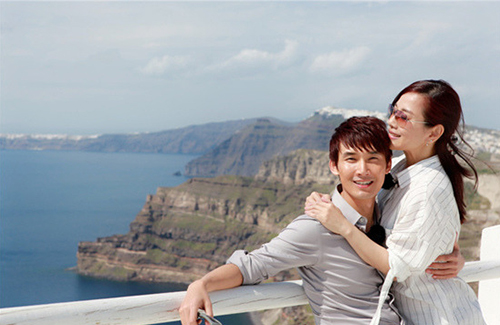 Starring as Donna in the Mandarin version of the musical Mamma Mia!, Adia Chan (陳松伶) is living her childhood dream. Auditions for the role took nearly a year, and training for the musical took all day and all the night—it was to the point that even her husband had heard Adia sing in her sleep. Adia said her next goal is to break out of China, performing for Chinese musical lovers all around the world.

Adia married Mainland Chinese actor Zhang Duo (張鐸) in 2011. Being over eight years younger, Duo was only 31 years old at the time, while Adia was 41. The couple’s stark age difference and different upbringing generated heavy discussion, but that did not faze the couple. Seven years later, Adia and Duo are still happily married, and considering about adopting children. 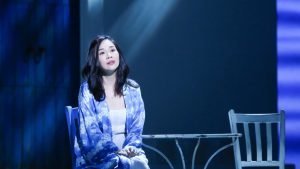 The past 30 years for Adia did not come easy. Although she found success early on in her career, a series of unfortunate events that occurred in her personal life made her reconsider her entertainment career. After filming TVB’s Trimming Success <飛短留長父子兵>, Adia took a hiatus from acting due to depression. In a single year, she went through her manager’s betrayal, her father’s passing, and a realization that her body may be unsuitable to bear children.

It took one musical (Jacky Cheung’s Snow Wolf Lake <雪狼湖>) and one man (Duo) to change Adia’s life around. Adia fell in love with Duo’s maturity, groundedness, and kindness. After dating for five years, the couple tied the knot, and settled in Beijing, where they opened up a film company together. Though the could do not have children, they are considering adoption, especially after volunteering in a program for children with disabilities. Being unable to bear children was one of the first things Adia told Duo when they got together. “It’s important to be truthful to one another,” said Adia. “You should not have anything to hide. Whether you’re happy or unhappy, the other person has the right to know.”

The couple have maintained a close relationship in the last 13 years. Despite their busy schedules, Adia and Duo would always make time to catch up with each other every single day. Adia said Duo is like a nagging wife, as he would always be the one to give Adia reminders of when to sleep and eat.

Even so, Adia and Duo have very similar personalities—in Adia’s eyes, Duo is a romantic man who would occasionally surprise Adia with gifts. “Before we started dating, he gave me a small heart-shaped jewelry as a gift. It was not cheap, so I didn’t want it, but he told me, ‘Why won’t you accept it? This is the heart I’m giving you, and I have a lock that can open it.’” Adia has kept the heart safe ever since.

1 comment to Adia Chan’s Husband is Her Biggest Support