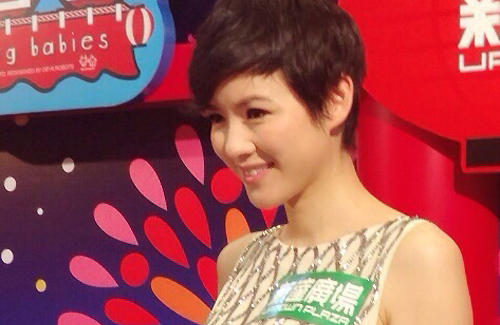 Since giving birth to her two sons, Aimee Chan (陳茵媺) put her acting career on an indefinite hiatus to spend more time raising her family. Although there were reports of her returning to the TV screen in the past, it has finally been confirmed that Aimee will be making her official comeback in Chapman To’s (杜汶澤) new 2016 movie, Time To Eat <開飯喇> (tentative title).

Time To Eat will primarily be filmed in Malaysia and Singapore, exploring the different cuisines that originated from Southeast Asia. A café owner’s spunky daughter, Rosemary (Aimee Chan), is about to take over the family business but she is met with many obstacles along the way. Besides trying her best to save the failing business, the newly appointed boss is constantly at odds with the head chef, Dai Hung (Chapman To). However, as business gets tough, the two set their differences aside and team up in order to overcome their competitors.

Slated to start filming in September, Aimee has been working very hard to lose weight for her upcoming role. To get her body into shape after giving birth, Aimee’s daily diet consists of only salads. As well, Aimee exercises for approximately two hours every day.

When asked if there will be kiss scenes in his new movie, Chapman laughed, “My wife [Kristal Tin 田蕊妮)] and Moses Chan (陳豪) had a kiss scene in Ghost of Relativity <鬼同你OT>. If there can be a kiss scene in TVB, why can’t I have one in Malaysia?”