Aimee Chan Wants to Be an Excellent Actress 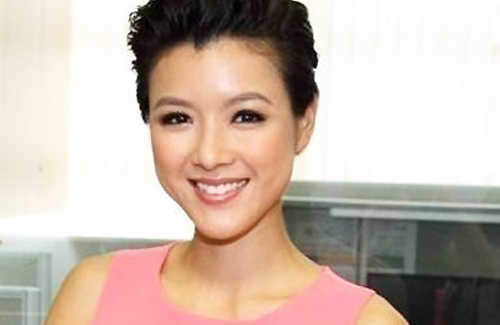 Aimee Chan’s (陳茵媺) sweet smile has attracted many male fans, and she even won the heart of bachelor, Moses Chan (陳豪). Since Aimee became Miss Hong Kong in 2006, her acting career has been going smoothly. She has become one of the most frequently cast actresses in TVB’s dramas, and will soon become one of TVB’s leading actresses. Aimee’s acting has improved tremendously since Master of Play <心戰>. In The Last Steep Ascent <天梯>, Aimee’s tragic character, Tin Oi Tai, was a challenging role to portray.  Aimee has developed a deep love for acting, and her goal is to become a very good actress.

Thirty-one-year-old Aimee loves to smile, and she is known to have a carefree personality. As an actress, Aimee has been portraying many sad characters that challenge her acting ability. In the series, The Last Steep Ascent, Aimee’s character suffered many misfortunes: being a mistress, getting raped, becoming pregnant, and suffering a miscarriage. She became hopeless, but luckily she meets her protector, Kenny Wong (黃德斌) to help her to go through all the difficult times together.

Getting into the Mood While Driving to Work

Aimee grew up in a happy family, and has never faced any hardships in her life. Her character in The Last Steep Ascent, Tin Oi Tai, is a polar opposite. She has to put in a lot of heart and  effort to portray the character. Aimee said Tin is an unfortunate girl who goes through one tragic incident after another, and finally loses all her hope to continue to live. However, she still has a strong and tough side of her.

Welcoming different challenges, Aimee tried hard not to smile in order to immerse deeply into the character. It is normally not easy to make Aimee cry. In order to get into a sad mood, she build up her emotions while driving to work and remained very quiet throughout filming.  Aimee did a great deal of mental preparation to get the best results.

Although Aimee and her boyfriend, Moses Chan (陳豪), are in the same series, they did not have that many scenes together. When asked if she had sought Moses for advice, she said every actor has their own way of thinking and they have to depend on themselves to bring out their inner emotions. Aimee had many scenes with Kenny Wong, and sometimes she would ask him whether her interpretation of her role was good enough. Aimee’s and Kenny’s roles depended on their feelings, so they happily worked well together during filming.

In 2009, Aimee won the TVB Most Improved Actress award. This year, her performances in Master of Play and The Last Steep Ascent have potential to give her another award. However, she did not want to have a high expectation to win. Aimee said she would be happy if she wins, and the award is a great source of motivation. However, she will not give herself too much pressure.

Acting in TVB series since 2008, Aimee believes that 5 years of acting experiences are not enough to be a good actress. Her biggest wish is for viewers to remember Aimee as someone who can act. Aimee’s ultimate goal is to become an excellent actress.

Desires to Take Acting Classes in the United States

Since Aimee’s first role in Catch Me Now <原來愛上賊>, she has acted in more than 15 TV series. She is very grateful for gaining these acting opportunities. Aimee is considered one of the TVB’s beauties, but has not had many rumors or scandals throughout her career so far.  She has a healthy image and considers herself to be quite boring. Aimee likes spending time at home, and at the beginning of her career, she would spend a lot of free time studying different characters by watching movies and reading books hoping to gain some acting knowledge.

Aimee actually has a wish to take some acting classes in the United States, but could not currently take 3 months off her busy schedule to fulfill her wish. Another reason why there are not many rumors and scandals about her is because she is more of a tomboy and has a brother-like relationship with her male costars.

At the start of Aimee’s career, she cut her long hair to a refreshing short hairstyle. Many of the producers liked her short hair, as it fit the straightforward character she played in the series. Aimee does not mind the short length, as she can always wear a wig for a character requiring long hair.

Wants to play a character with mental disorder

Aimee hopes to play more challenging roles in the future. She revealed that she really wants to play someone who has a mental illness, a role with a complicated personality or even a villainess. Aimee also wishes to play an undercover cop like Tong Leung (梁朝偉) in Infernal Affairs (無間道).  She does not mind trying out any roles, as long the characters are not repeat performances.

After The Last Steep Ascent, Aimee’s next series, The Confidant <大太監> will be airing in November. Aimee portrays an innocent sweet princess who is the polar opposite from her character in The Last Steep Ascent. The collaboration with veterans, Wayne Lai (黎耀祥) and Michelle Yim (米雪), has given Aimee a chance to really enjoy their performances and learn from their experience.

91 comments to Aimee Chan Wants to Be an Excellent Actress