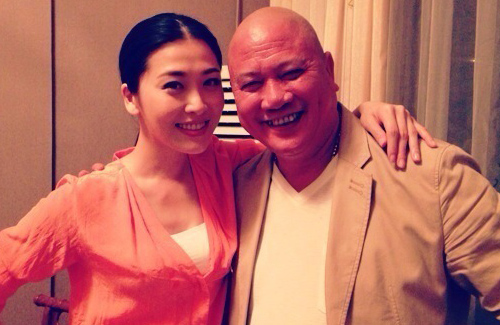 Alex Man (萬梓良) had been prominent in numerous TVB dramas in the 1980s. In 2002, after he married his wife who is 17 years younger than him, Alex moved to Guangzhou and steered his career towards the mainland market. After the birth of his son, 56-year old Alex worked hard to earn money to support his family. He filmed dramas, advertisements, movies, and participated in various variety shows. In the meantime, he even operated a fashion business. Unfortunately, Alex is now diagnosed with inherited Type 1 diabetes, which led to a weight gain of 60 pounds.

Having also suffered from gout and high cholesterol, Alex is considering retiring from the entertainment industry early. After all, health is much more important than money. A few months ago, Alex hurriedly walked out of Chinese Dream Show <中國夢想秀> because he suddenly lost his temper and yelled at one of the contestant’s father. Alex’s illness may have affected his personality as well, making it easy to push him to rage.

Two months ago, Niki Chow (周麗淇) uploaded a photo of herself alongside Alex on Weibo. In the photo, Alex was bald and possessed an apparent double chin. Furthermore, he had a bulging round belly. Due to these features, netizens pointed out that Alex should portray Zhu Bajie, the pig from Journey to the West <西遊記>. Alex laughed and said, “Recommend me. It’s okay, I don’t mind! After all, I have at least 300 million fans.”

Alex expressed that with his health in concern, he has to quit smoking and eating seafood. “My joints would hurt a lot when I eat seafood and drink beer.” In addition, Alex revealed that his memory is deteriorating as well, and he forgets his lines right after he reads the script. When he climbs a few steps, he would instantly be out of breath. “I’m not afraid of dying, but I will miss my son,” he exclaimed.