Since Ali Lee (李佳芯) broke up with actor Danny Chan (陳炳銓), she is said to be aggressively pursued by widowed billionaire Mark Chan (陳恩德). When Ali was seen leaving a hotel with Mark hot on her heels, many were startled over whether they were actually in a relationship together.

In late October, Ali and Mark were seen stepping out of an elevator in The Ritz-Carlton Hotel in Kowloon. Both were dressed casually and wearing masks, with Ali walking quickly ahead. Mark was carrying two paper bags and after seeing Ali board a mini-van, he climbed in as well. 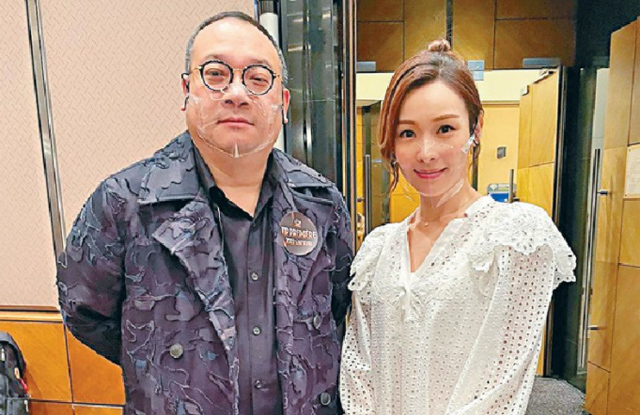 It was said that a 40-year-old businessman had especially rented a snowmaking machine at his home last Christmas to surprise Ali. Delighted by the surprise, Ali had posted photos on Instagram without realizing that her selfie would cause so many misunderstandings. With a clear separation between work and her love life, Ali did not wish for the two to be muddled.

When reached for comment, Mark acknowledged that he had thrown a party with artificial snow last year. As for their hotel meetup, Mark revealed they “were discussing about collaborating together” on a charitable project.

Although denying several times that they are dating, Mark finally laughed, “I also hope it’s true…why don’t you arrange it?” Afterward, Mark said “he is too old” for Ali, but complimented her for being “a wonderful person.” As being the rumored investor behind Ali’s debut directorial short film, Mark paused before stating, “No comment.”

Ali Admits Working on Film Together

Responding to press questions, Ali confirmed that she met with Mark at the hotel to discuss “a short film about brain deterioration.” As to whether there was room for romantic development in their relationship, Ali said, “No, it won’t happen. Thank you.”

Earlier, Ali had disclosed that although she currently has romantic suitors, she is also a little weary about starting a new relationship, as it is not easy and takes time to get to know a person thoroughly. While many people have been urging her to get married soon, she feels that it is hard to find someone with similar values. At this point, even her family has stopped pushing her!

There were also reports that Ali had relocated to a hotel in Tseung Kwan O in preparation for moving into a new home. She denied the reports, and confirmed that she is still renting a service apartment in Hung Hom while waiting for housing prices to drop before making the decision to buy.