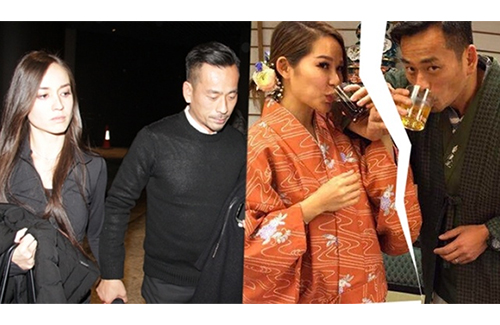 All paparazzi cameras were focused on Macau casino tycoon Alvin Chau (周焯華) when his wife Heidi Chan (陳慧玲) and lover Mandy Lieu each gave birth to daughters in May of this year. Various reports have indicated that Heidi had attempted to get a divorce from Alvin, but the Macau businessman repeatedly denied her wish. He wanted to have both Heidi and Mandy.

But the Alvin and Heidi romance seems to be ending for good. Yesterday, Alvin and Mandy were spotted holding hands while leaving a hot pot restaurant in Kowloon. This “hand holding of the century”, as the Hong Kong reporters liked to call it, indirectly affirms that Alvin and Mandy can now be together publicly. It also indicates that Heidi has finally decided to step down from this saga.

This extramarital scandal has been heavily documented by the Hong Kong paparazzi since last August, when it was discovered that Alvin and Mandy were in a relationship. The affair was definitely a deal breaker for Heidi, but Alvin, who “really loves” Heidi, didn’t want to separate from his wife of thirteen years. His heart remained loyal to Heidi and their kids, and he attempted to maintain both families by keeping Mandy away from Hong Kong.

But Mandy’s arrival in Hong Kong this month has shown that Alvin could no longer convince Heidi to stay. Heidi told Alvin that even if he refused to sign the divorce papers, she will petition.

In a phone interview, Heidi admitted that she has filed for divorce from Alvin. She calmly said, “Yes. It’s true. Because I’ve left the matter for my lawyers to handle, it is not convenient for me to say anything more. Thank you for your concerns.” Sources say their divorce will be finalized in February, and that she has requested full custody of their children.

Heidi’s close friend, producer Tiffany Chen (陳嵐) said, “If it was me I would not have let go and hand over my husband so easily! We are all couples who have started from scratch in the business, and made it this far together. Hopefully [he] will cherish the ones in front of him.”

Angela Leong (梁安琪), Stanley Ho’s (何鴻燊) fourth wife, said, “That’s not good news. They’ve been married for so many years, and they have children too. I hope they will talk. But it’s hard to comment on other family’s business. When I see Alvin I will ask him what’s going on.”

Meanwhile, Mandy Lieu’s agency has refused to answer more questions in regards to Alvin. They stated, “Mandy returned to Hong Kong for personal reasons. We are not clear of her schedule, so we will not answer any personal questions about Mandy. We will also not intervene with our artists’ personal lives. Thank you for the concerns.”