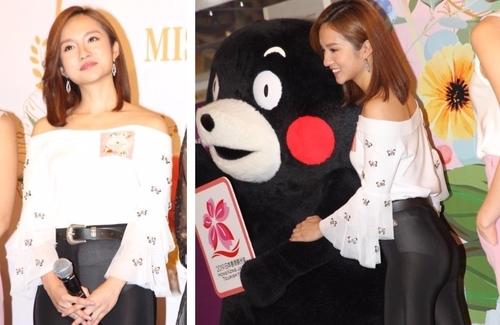 Today, TVB held a 2019 Miss Hong Last Call <2019香港小姐競選> event in an effort to encourage more women to join this year’s beauty pageant. Previous winners, including last year’s First Runner Up and Miss Photogenic Amber Tang (鄧卓殷), attended the campaign to support the push. The 24-year-old honestly admitted her friends are not interested in competing, so she will have to continue to look for people she can nominate. As transparent as she was, her black fitting pants were also quite sheer, revealing her white underwear underneath.

When it comes to the Miss Hong Kong Pageant, Amber thinks there are two points to note. As there is not enough time to prepare for the interview after receiving the interview notice, she believes one should start preparing for it right after signing up.

“Eat healthy so you can showcase your best self to the judges instead of rushing to slim down at the last minute. I have a habit of exercising, so I did not have that problem back then. And go to the interview in light makeup because the judges want to see your natural face,” Amber advised.

She Showed Concern for Her Rumor Boyfriend

When reporters mentioned that Arnold Kwok (郭子豪) was sentenced to 90 hours of community service and a one-year suspension of his driving license because of drunk driving, Amber said, “He feels more at ease now that’s over. He said he wouldn’t drink and drive again.”

However, Arnold will not avoid drinking altogether. Despite so, Amber won’t be his chauffeur when he drinks. “I don’t have good driving skills even though I have a license. I need to have my father by my side because I’m afraid of Hong Kong’s narrow roads,” she said.