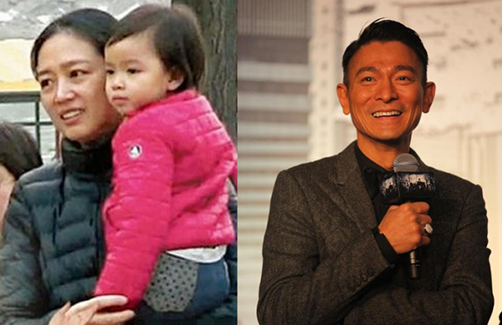 Andy Lau (劉德華) surprised his fans when he brought his daughter Hanna to his birthday fans club party last week, giving the public a first glimpse of his three-year-old daughter.

Busy with the promotions for his upcoming film Saving Mr. Wu <解救吾先生>, Andy will not be able to celebrate his 54th birthday next Sunday, which is also the day of the Mid-Autumn Festival. Andy and his fanclub, Andy World, then decided to celebrate his birthday a week in advance, and held the party last Saturday. Besides Hanna, his wife Carol Chu (朱麗倩) and his parents also came to celebrate.

To protect his family’s privacy and to give Hanna a normal childhood, Andy seldom invites his wife and daughter to public events. However, the superstar actor promised his fans that he would introduce his daughter to them when Hanna turns three.

A few blurry shots of Hanna and Andy’s parents at the birthday party have been circulating around the web. Hanna wore a white dress and her face resembles Carol. When Andy brought his family to the stage to cut his birthday cake, Hanna looked shy and had her head on Andy’s shoulder the entire time.

Andy played many games with fans, performed a play on stage and sung a few songs. During the middle of a performance, he led Carol and Hanna up to the stage, singing with them.