The 57-year-old Andy Lau (劉德華) and his 52-year-old wife Carol Chu (朱麗倩) are known to be loving parents to their seven-year-old daughter Hanna Lau (劉向蕙), and it’s easy to tell just by looking at their attendance record at her school events. Even when the “Heavenly King” is unable to participate, he makes sure his wife is attending and sends bodyguards to ensure his family’s privacy and safety – like he did during Hanna’s school’s sports event a few days ago.

Since last September, Hanna has been attending a famous international school on Hong Kong Island, which is known for prioritizing the development of students’ physical fitness and personality over academic performance. Its annual sports event was held at the Hong Kong University’s Sports Centre in Pok Fu Lam recently and Hanna naturally participated for the first time. Although Andy was unable to be there in person, the doting husband and father arranged three bodyguards to follow Carol to the event.

At about 9 a.m., two bodyguards escorted Carol to the Sports Centre. While the event was taking place, the two men stayed outside the venue and checked the surrounding area from time to time to ensure Hanna was not being secretly filmed. There was another bodyguard inside the venue who followed the Lau family closely. Every time Hanna went on the field to participate in an event, the bald-headed guard would be by her side.

Hanna grew visibly taller since last December when she was last seen supporting Andy at his concert at the Hong Kong Coliseum. With her long hair pulled back into a ponytail, it was easy to see she had big eyes and a high nose – of which she inherited her dad’s signature “hawk nose.” Not only is she pretty, but she was also quite lively. The child was able to run very fast with her long legs and showed compatibility with her teammates. Full of sports cells, Hanna’s sportsmanship and physical strength is better than most children her age.

Perhaps, her sports skills are all thanks to Andy’s cultivation. He previously shared his childrearing tips with the public and said he believes parents should let their children participate in competitive games and let them understand that “there are losses, highs and lows.” Moreover, he rarely lets Hanna get her hands on electronic products as he prefers her to run around at home or jump on the trampoline. 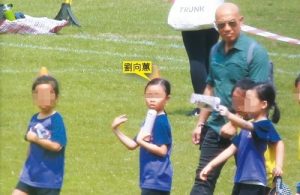 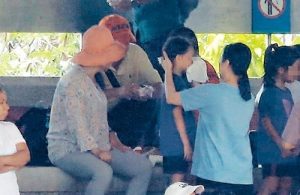