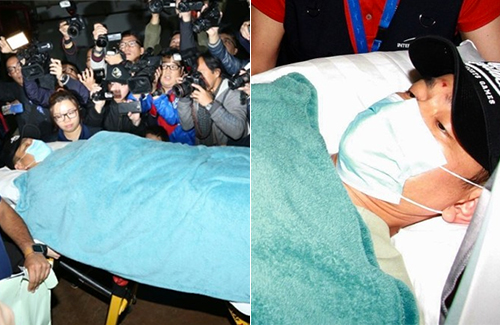 While filming for a commercial in Thailand on Tuesday, Andy Lau (劉德華) fell from his horse and was trampled on. The horse stepped on his waist and cracked his pelvic bone. His lower back was also injured.

Andy was flown back to Hong Kong via air ambulance and arrived early Wednesday morning. He was immediately taken to the Hong Kong Sanatorium & Hospital in Happy Valley and was wheeled in on a stretcher. Andy was wrapped in a blanket, and wore a surgical mask and a cap. The scene was chaotic—reporters crowded around the actor, who looked like he was in pain. His forehead was slightly swollen.

Andy was brought to a private suite room and was thoroughly examined. Sources say Andy is in stable condition and does not need to undergo surgery, but needs to remain hospitalized for further observation. It is estimated that Andy won’t expect a full recover until late summer to early fall.

According to news reports, Andy’s emergency flight back would cost him about $1 million HKD. It is estimated that Andy would have to spend for $5 million HKD for his medical costs due to this accident.

As Chinese New Year will be in a week, a source close to Andy said the actor is looking to get discharged by the New Year so he could spend the holidays with his family.

9 comments to Andy Lau Severely Injures His Lower Back