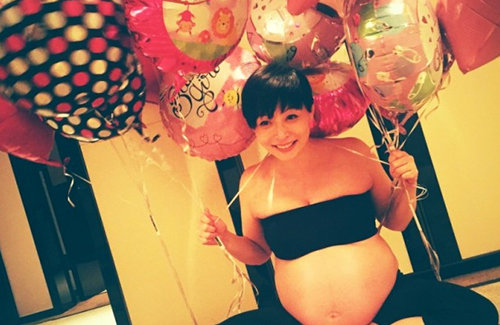 There has been quite a few mother-to-be’s in the entertainment industry recently. Angela Tong (湯盈盈), over eight months pregnant with her second child with actor Chin Ka Lok (錢嘉樂), recently attended a baby shower with her close friend Margaret Chung (鍾麗淇), who is also pregnant.

With only a month left until labor, Angela’s belly is large and round. The 40-year-old mother showed off her gigantic belly in a Weibo picture, wearing only a blank bra top and yoga pants.

“I am so thankful to my good sisters who had arranged such an adorable baby shower for me and Margaret to celebrate the little babies in our belly!”