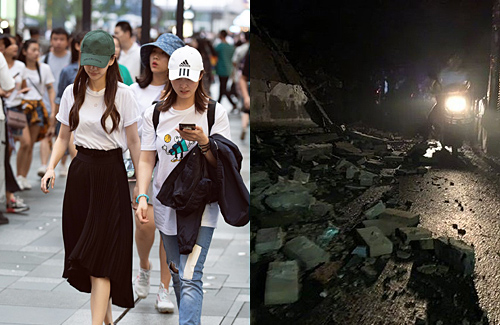 On June 17, a 6.0 magnitude earthquake struck the city of Yibin in Sichuan, followed by aftershock measuring 5.1 magnitude in the surrounding areas. Along with the numerous structural damage in the area, latest news release reported that the earthquake claimed the lives of 12 people and injured at least 134 people. While rescue efforts are underway, Angelababy (楊穎) is currently seeking refuge in the area and provides fans with updates on her well being.

Evident in her social media, Angelababy was in the neighboring city, Chengdu and even posted pictures of herself before the earthquake struck. However, Angelababy soon found herself caught in the earthquake when the tremor was felt across several regional cities in the province of Sichuan.

Providing an update of her situation, Angelababy posted on her social media, “Earthquake, ran down 20+ flights of stairs. Scared. The tremor was obvious. Hope everyone stay safe.”

In addition to Angelababy providing an update, Chinese actress Whang Zhi (王智) was also in the area and declared that she is safe.