Later, Barbie responded, “We are all human beings, and we all live on this earth. If we don’t help each other, then this is not the behavior that humans should have! Without help, the earth will only be worse! Hate is scarier than any virus!”

Still, the couple must’ve realized they didn’t do well enough, and Xiaofei immediately announced they also have face masks for Taiwan. He said on Weibo, “Today, I bought 10,000 masks with the help of my good brothers in Taipei. Although I don’t have a way to send it out, local friends also need it, so 5,000 are placed at our Taipei S Hotel for our employees and guests to use for free, and we asked our community leaders to donate the other 5,000 to our neighbors.”

He added, “Distant relatives are also family, and Taipei is also partly my family. I will do what I can.”

Although Xiaofei tried to appease Taiwanese netizens, he attracted the dissatisfaction of Chinese netizens. A mainland netizen said, “You are really thoughtful. The mainland is lacking in masks, so you should give it to the mainland first. Taiwan doesn’t even need masks. I don’t want to deny that you care, but if you are patriotic, you must take good care of your country.”

It seems the couple can’t appease both sides. 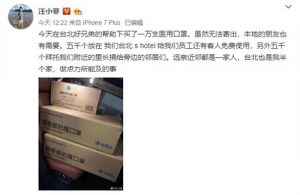 Is it the end of their 10-year marriage?