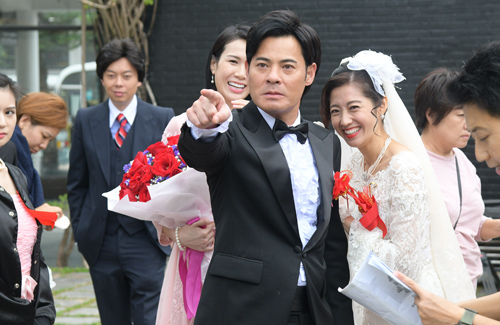 In Golden Crime, Ben portrays as a hot-tempered rich second generation while Yoyo is his bitter wife who is continuously hounded by his family. During the filming of the wedding scene, both wore wedding outfits from the 1970s to suit the era. The appearance of Yoyo’s ex-boyfriend causes him and Ben to get into a heated scuffle, while wedding guests were seen having to pull them apart.

Speaking with the press afterward, the 51-year-old actor shared he felt blessed in his marriage. Married for 15 years, they have no children, but are raising two dogs together. Ben said, “A married couple must remember the wedding anniversary. Every year, we would choose a restaurant we haven’t tried before, and go there to celebrate the anniversary. Even if it’s a bit expensive, we’ll still go. I have to work this year on our anniversary date, but all these years, my wife has always been very understanding of my job. Whatever she likes to eat on the day, I’ll go and eat with her. My wife really loves to eat, so celebrating the anniversary normally runs for a week where she’ll choose a good restaurant and we’ll go eat together and also celebrate with friends.”

Yoyo, who was frequently rumored to be having marital problems with husband Vincent Wong (王浩信), shared, “Everyone would mostly say a marriage requires both to tolerate and embrace each other’s flaws. For me, I think a good marriage needs both to free each other. It’ll can be learned through growth in the marriage. Understanding what the other wants to do, knowing what you want to do. In the marriage, you’ll both want to do something, to go be yourself, and so supporting each other is really important. When you’re upset at your spouse over something, try and reflect on yourself as well.”