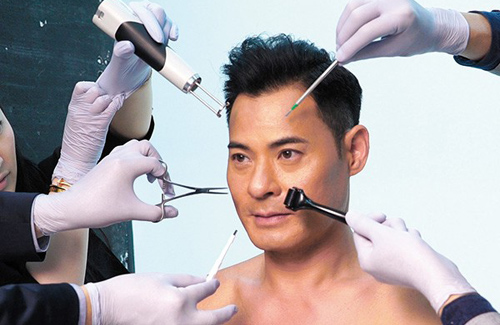 Ben Wong (黃智賢) could be described as somewhat of a late bloomer. Having been in the entertainment industry for 29 years, it has only been of late that he has been cast as the male lead, most recently in TVB drama OMG, Your Honour <是咁的，法官閣下>, where he portrayed barrister John Fan. The 51-year-old has also seemingly become more and more attractive with age. Despite all this, however, Ben continues to work hard towards his and his wife’s future, recently investing a seven-figure sum into a medical beauty salon.

It is known that Ben had a difficult childhood. As his family was poor, he and his eight siblings were forced to live in a small partitioned apartment. His father, who was a hawker selling roast meats, had a gambling problem which forced Ben and his siblings to pay off those debts for many years. At the age of 14, Ben applied to the youth police training school to be a boarder. His only request at the time was a bed to sleep in and to be fed.

In 1989, Ben changed jobs to become an artiste and also worked part-time in a restaurant to earn money to support his family. It was there that he met his wife. According to Ben, the experience of his poor childhood, coupled with his 29 years in the entertainment industry, have made him realize that the most important part of life is to be free and unrestrained. It is because of this that he and his wife have decided not to buy a property and also not to have children.

Investment in the beauty industry

In today’s high-definition television era, artistes need to take great care with their appearance, as their pores, wrinkles and other signs of aging are clearly visible to audiences. Ben is no exception, and a couple of years ago he began to receive laser treatment, which led to a significant improvement in the quality of his skin. In fact, the results were so remarkable that he decided to invest a seven-figure sum with the two doctors who had treated him, in their medical skin laser center in Central.

Despite being busy filming, Ben still devotes time and energy to the beauty salon business, and was recently spotted with one of his business partners and a female staff member at a lunch meeting in Central. After the meal, the three walked back to the beauty center to inspect the business. In addition to personally checking and answering customer inquiries in the store, Ben was also spotted learning how to make appointments and accept clients from the staff present, and also inspected the various equipment used on the premises. All in all, he seemed serious in learning about how to run the business, by no means a hands-off business partner.