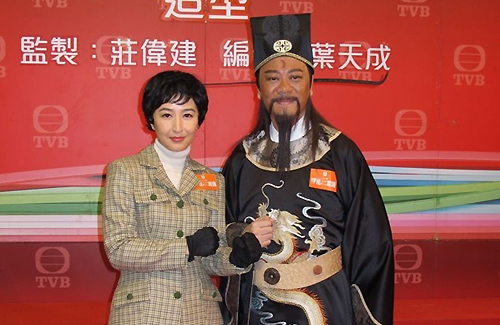 Unforgettable TVB couple, Bobby Au Yeung (歐陽震華) and Esther Kwan (關詠荷), are reunited after a 10-year hiatus. The costume fitting for new drama, Love Reverses Three Lifetimes of Fate <情逆三世緣> took place on November 12. Both Bobby and Esther chattered excitedly that they accepted the custom-tailored roles since they wished to work together again.

Love Reverses Three Lifetimes of Fate will follow the tragic love lives of Bobby and Esther’s characters, spanning across 1,000 years from the Song dynasty to modern times. With the ability to portray three different characters in one drama, Esther loved the concept and said that it will be a lot of fun, similar to fulfilling three wishes at the same time.

Esther and Bobby will have an underwater scene. Followed by CPR and chest compressions, Esther joked that she will need a stunt double for the scene.

Portraying a sassy princess in the new drama will be Christine Kuo (苟芸慧), which will be a marked departure from her past demure roles. Dressed in male garb, Christine said, “This time, I can play tricks on others!”