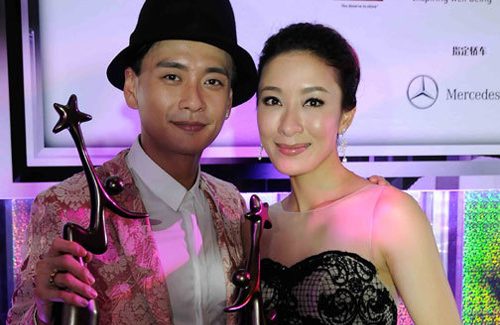 Many Hong Kong celebrities attended Singapore’s Starhub TVB Awards ceremony last night. Triumph in the Skies 2 <衝上雲霄II> was the biggest winner that night when it swept a total of 4 out of the 20 awards, including My Favorite TVB Drama. Bosco Wong (黃宗澤) and Tavia Yeung (楊怡) won the most coveted individual awards, the My Favorite TVB Actor and Actress awards.

Organized jointly by Starhub and TVB, the 4th annual awards ceremony recognizes TVB’s artists and programs based on their popularity in Singapore. Other than being voted My Favorite TVB Drama, Triumph in the Skies 2 was also voted the Singapore Media’s Favorite TVB Drama. Myolie Wu (胡杏兒) and Chilam Cheung (張智霖) won  the My Favorite TVB Female and Male Character for their roles as siblings in the drama.

Besides Myolie and Chilam, there are 5 other winners each for My Favorite TVB Female and Male Characters. The other 5 Favorite TVB Female characters are Tavia Yeung in Silver Spoon, Sterling Shackles <名媛望族>, Niki Chow <周麗淇> in A Change of Heart <好心作怪>, Michelle Yim (米雪) in The Confidant <大太監>, Kate Tsui (徐子珊) in Highs and Lows <雷霆掃毒> and Linda Chung in (鍾嘉欣) Witness Security <護花危情>.

Bosco also shared the My Favorite TVB Onscreen Couple award with Niki for their irresistible onscreen chemistry in A Change of Heart. The Best TVB Female and Male newcomers were awarded to Christine Kuo (苟芸慧) and Jason Chan (陳智燊) respectively.

Hosted by King Kong (李信樵) and Elaine Yiu (姚子羚), the ceremony also gave away awards such as the Everlasting Glow Award which was given to Linda Chung. The Most Dazzling Female Artist award was awarded to Kate Tsui.

Because of work, Myolie took an earlier flight to to Singapore and did not share a flight with the rest of her TVB colleagues. When it was speculated that Myolie avoided being on the same flight as ex-boyfriend, Bosco, she replied, “No, it’s been so long! I had work so could only catch a later flight.”

Hong Kong media recently reported that TVB intends to set up its own record company, called Stars Dream Entertainment and intends to sign on its own managed artists as singers. When Myolie was asked if she had been approached, she revealed, “I never heard of it. I personally don’t even whether I want to continue singing because singing takes up a lot of time.” Whether it is the mainland Chinese or Hong Kong markets, she hopes to focus on one area of her career at a time.