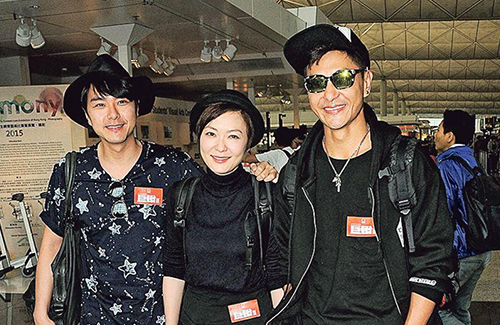 In the last episode of the original series, Kiu Tin-seng (Ruco Chan) leaves his girlfriend Rachel (Linda Chung) and his brother (Edwin Siu) to search for his “golden biscuit.” He returns in the sequel to find Rachel, chasing her all the way to Okinawa. Ruco revealed that he will make up with Linda in the series, and the two will also have kissing scenes. “It is quite romantic, and intense too,” said Ruco.

As Ruco will only be making a special guest appearance in the sequel, he will not have many scenes to shoot in Okinawa. Ruco is happy to know that he will have some time to take a tour around the Japanese island.

Kristal, who won a prize at the 48th TVB Anniversary Gala on Thursday, said she will use her prize money to treat the cast and crew to a meal. Receiving two nominations at the upcoming TVB Anniversary Awards, Kristal expressed that she has confidence in winning and will treat her friends again if she wins.

Edwin Siu and Grace Chan to Have Nude Swimming Scene

The cast of Brother’s Keeper II plan to stay in Okinawa for two weeks. Grace revealed that she and Edwin will have a nude swimming scene, and joked, “Originally they wanted to get a body double for me, but no one wanted to do it!” On why her character swims in the nude, Grace explained, “I play a really outgoing character, someone who will do whatever she wants. I jump into the pool because I see it as a way to relieve stress. I then tell Edwin Siu to jump in with me.” Grace said she will not feel embarrassed, as they will not be actually naked when doing the scene.

Grace’s mother will also be staying with Grace, but only for a week. Her boyfriend Kevin Cheng (鄭嘉穎), however, will not be visiting her. “He has work in Hong Kong,” Grace said.

Edwin shared that he has not met up with girlfriend Priscilla Wong (黃翠如) in a while. “She is in Taiwan filming, but we do keep in touch as much as we can.” Will Edwin buy any souvenirs for Priscilla when he arrives at Okinawa? “Yes, when I see something suitable. When she was in Paris, she bought a bag of white truffle nuts for me. It’s heartwarming.”

In regards to his nude scene with Grace, he said, “We will not be really nude. There is a limit when it comes to television, and even if something slips off, there will be brackets to censor it! No need to worry!”