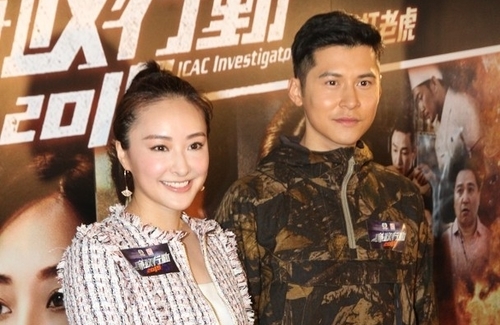 The cast of TVB drama ICAC Investigators 2019 <廉政行動2019>, Carlos Chan (陳家樂), Jeannie Chan (陳瀅), Winki Lai (賴慰玲), Rosanne Lui (呂珊) and Raymond Cho (曹永廉) recently showed up in Tsim Sha Tsui to promote the series. Jeannie said she tunes in every week, whereas Carlos just caught up after returning to Hong Kong from filming in Mexico. He revealed his family praised Jeannie’s natural acting skills and said she’s better than him. On the other hand, Jeannie’s grandmother mistakenly refers to Carlos as Carlo Ng (吳家樂).

Aside from their families, the pair said viewers also had positive feedback and are very accepting of them as on-screen lovers. Jeannie said with a smile, “I heard people say that we’re pleasing to the eyes on TV and we look compatible. Carlos’ fans weren’t mad at me [for working with him] and they didn’t yell at me – they seem to accept me.”

Meanwhile, Carlos said the same couldn’t be said about Jeannie’s fans. “My friends sent me screenshots of people saying in forums, ‘Jeannie is so pretty but why is Carlos here?’”

To make Carlos feel better, Jeannie said she read many fans have sexual fantasies about Carlos. When reporters asked how she feels about him, she said she doesn’t have any desires towards him since she’s known him for so long. She also added that he’s not hot enough with his windbreaker on. “He’s a little hot, but not hot enough today. Shouldn’t you be very fit after coming back from filming [in Mexico]?” she joked.