The couple held their wedding banquet at the Four Seasons Hotel in Central district, inviting over 100 guests. Witnessed by the priest and friends, Catherine officially became “Mrs. Zhang.” The newlyweds exchanged a sweet kiss outside the Four Seasons Hotel an shared their newfound joys of marriage with the media.

Ada Choi As Master of Ceremonies

Ada Choi Siu Fun, Yoyo Mung Ka Wai and Monica Chan Fat Yung were the bridesmaids, while Mak Bao and Poon Mei Sun were the groomsmen. Although the banquet did not include bride and groom games, but the bridal party allegedly [played games earlier that day].

At 4 PM, the guests arrived at the Four Seasons Hotel. Ada Choi and Mak Bao acted as the MC’s for the evening. When speaking to reporters afterwards, Mak Bao wished the newlyweds lifelong happiness, daily joy, and that each day resembled a sweet honeymoon.

Ada revealed that the bride and groom games were based on a sweet, loving theme. “We will ask the groomsmen to pass candy via their mouths, so that the sweetness can be transferred to the newlyweds.” Due to the length of Ada’s skirt, reporters asked her to show off her legs. Ada allowed the press to take photographs, while Yoyo deviously touched Ada’s legs, causing much embarrassment. Monica did not take a photo with the rest of the bridal party. Originally, Monica was supposed to wear a beautiful dress, but discovered a tear in it last minute. She called one of her designer friends for help and was provided with a new dress to wear.

Catherine’s beloved son was the ring bearer. “My son was the happiest!” Dangfeng said, “I am very happy to have married such a wonderful wife! I will take care of her and love for life!” Standing by her husband, Catherine said, “He always says this!”

Asked what words moved Catherine to tears, the bride said: “Nothing thus far. Perhaps I have been too busy all day and there has been no rest for some time.” As to what games were played on the bride and groom, Catherine said that the bridesmaids will be responsible for them. Did Catherine request the games be more lenient on the groom? “Not really; it’s better to be surprised.”

In addition, Lee Shau Kee, Lau Luan Xiong, Ray Liu Leung Wai, Chu Ling Ling, and her husband, Vincent Lo, were all spotted at the Four Seasons Hotel the same night, but they were likely not guests at Catherine and Danfeng’s wedding. When Chu Ling Ling discovered the presence of reporters, she quickly left.

Jayne: Congratulations to Catherine Hung and Zhang Danfeng! They look like a lovely couple. Zhang Danfeng is quite handsome; the 11 year age difference between the bride and groom is impossible to tell! So many actresses/ actors marrying mainland co-stars now. 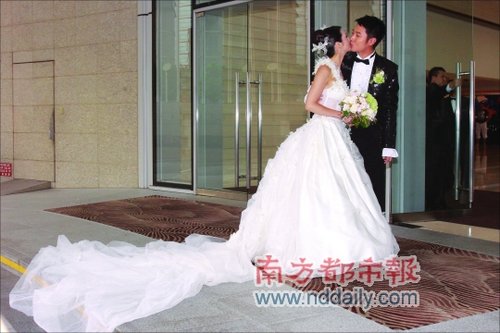