By jayne on December 8, 2009 in Celebrity Weddings, NEWS

Mimi Lo Man Jong and Power Chan Kwok Bong ended their 7 year courtship and got married last week. The couple held a two night banquet at the Hyatt Regency in Sha Tin. Since TVB held its Anniversary Awards on the same night, Mimi and Power’s colleagues in the entertainment industry attended the banquet held two nights before. In attendance at the 22-table wedding banquet were primarily Mimi and Power’s family and friends.

At 4:30 PM, Mimi and Power signed their marriage papers in front of their lawyer. Mimi’s father brought the bride before the groom and said, “I will now hand over my daughter to you.” Power’s eyes welled with tears; he could not talk, so he only nodded. Since Mimi’s father was a former policeman, he was dissatisfied with the vague reply. Mimi’s father said, “I want you to say you agree to do so.” Power said, “I will do so because I am scared.” The scene was touching, yet humorous.

Mimi could not sleep the night before since she was too nervous. Many guests in attendance said that the ceremony and banquet were filled with joy. Mimi smilingly said that she sent numerous SMS text messages to friends the night before, requesting them to not leave the banquet until they were “drunk with happiness.” Indeed, many guests got drunk. However, Mimi and Power did not have a very high alcohol tolerance.

Originally, Mimi intended to sing a song at her wedding. However, when she entered the banquet hall and heard the cheers of her guests, she broke into tears and could not sing.

Mimi and Power will be starring in a Lunar New Year special. Mimi and Power said they were uncertain whether they will play a married couple in the new project.

The guests last night included Jacky Lui Chung Yin and wife, Mak King Ning. Power and Jacky knew each other when they were students and thus were “good brothers.”

Jayne: Congratulations to Mimi & Power! It seems like they have been together forever. As for the bride & groom fashions…Mimi’s gown and veil are a little standard. Her dress doesn’t quite stand out. And why do Asian grooms like to wear white? Power’s gold rimmed glasses just add to the dorky look. I personally like the spa photos they took in Japan a lot. Very intimate and deserving to be in their wedding album. The other photos are a little stylized and the scenery in Japan seems to steal the attention of the photographer’s lens instead. Maybe we don’t have to wait long for Little Power to be on the way…. 🙂 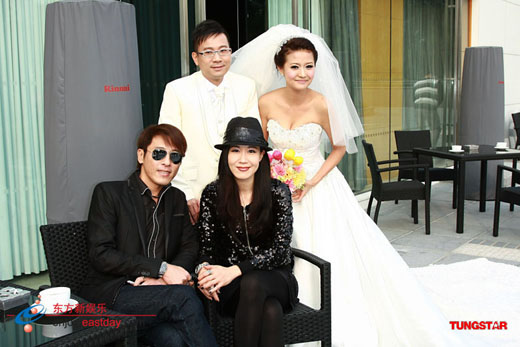