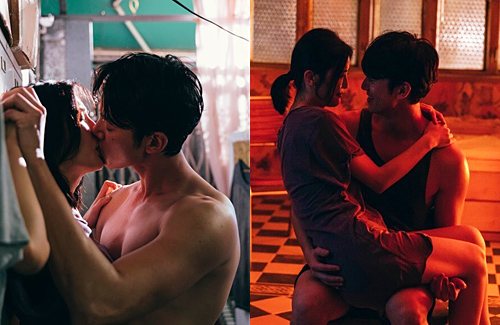 Taking on the biggest challenge in her acting career yet, Charlene Choi (蔡卓妍) gives it her all in new provocative film, The Lady Improper <非分熟女>.  The story revolves around Charlene’s character, a woman who has been married for four years but is still a virgin. After losing her job, Charlene returns to work at her father’s restaurant, where she meets and becomes attracted to Chris Wu (吳慷仁).

Due to the sexual nature of the film, Charlene sincerely hopes that audiences are able to forego their initial judgement and go see the film with an open mind. Understanding that the market in Asia is rather conservative in comparison to western countries, the actress said, “I hope viewers take this film as a chance to let go of their clouded judgement to understand the story and message behind the film, and not just focus on whether or not the female star is nude or not.”

Besides her intimate scenes, Charlene also appears in several pole dancing scenes wearing black lingerie. In terms of filming these scenes, Charlene expressed, “When accepting a job, I currently place more focus on the actual screenplay, and how the character and story line allow me to expand my acting horizon. Nudity is required and it’s only for the sake of the role – that’s usually where I set my limit.”

Slated to hit theaters this April, numerous trailers and teasers have been released to hype up the media buzz. In one of the trailers, Charlene was seen kissing Chris Wu. On working with the Taiwanese actor for the very first time, Charlene praised him and commented how professional he was and how he made the entire filming experience a smooth one.

With The Lady Improper being his first Hong Kong film, Chris also enjoyed working with Charlene. The actor complimented the director and the entire production team for taking such good care of him during filming.