Charmaine Sheh Has No Opinion About Grace Chan 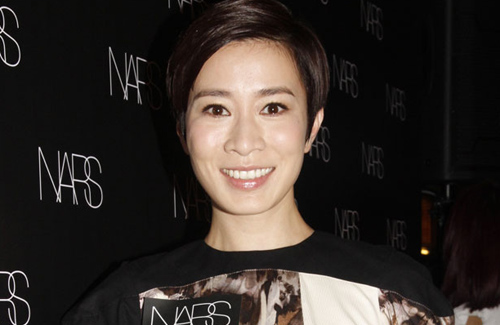 At the grand opening event for a cosmetics brand, Charmaine Sheh (佘詩曼) revealed that she is currently still busy with the shooting of Return of the Cuckoo <十月初五的月光>, the movie adaptation of the 2000 TVB drama of the same name.

The film, which features the return of original cast members Chilam Cheung (張智霖), Nancy Sit (薛家燕), Michael Tong (唐文龍), Kwok Fung (郭峰), and Irene Wong (汪琳), also stars new cast members Joe Chen (陳喬恩), Natalie Tong (唐詩詠), and Ruco Chan (陳展鵬). Charmaine shared that filming for the film is near completion, and the crew plans to wrap up by the end of May.

Charmaine said she will be going to Macau’s tallest building, the Macau Tower, to film a few scenes. Although Charmaine is afraid of heights, she is actually more afraid of getting injured again. “Fear can be overcome, but I am worried about aggravating my old neck and waist injuries. I don’t want to get injured again. After this job, I can take a break for the summer.”

Charmaine’s former boyfriend Kevin Cheng (鄭嘉穎) is rumored to be dating Blue Veins <殭> costar Grace Chan (陳凱琳). Asked for her thoughts on Grace, Charmaine admitted, “I don’t know her as I haven’t collaborated with [Grace] before. I’m actually more familiar with last year’s Miss Hong Kong contestants as I was part of the judge panel. I hope all of them have good developments.”

In regards to the news that TVB plans to open a public voting system for the upcoming Miss Hong Kong pageant, Charmaine said she supports the decision. “That’s fun! It’s a good thing because everyone gets a chance to participate. It’s good to have new ideas. I’ll definitely participate in the voting and support the girls.”

6 comments to Charmaine Sheh Has No Opinion About Grace Chan