Successfully transitioning her career to China, Charmaine Sheh (佘詩曼) has appeared in popular dramas The Story of Yanxi Palace <延禧攻略> and The Legend of Xiao Chuo <燕云台>. An especially dedicated actress, Charmaine reveals that she currently works between 16 to 18 hours every day. Her busy schedule naturally made it difficult to date, but the 45-year-old still believes in marriage.

Winning over new fans with her acting, especially her strength in emotional scenes, Charmaine reveals how she adapts to portraying the continuous string of new characters in her 24-year career. Charmaine confessed that it is difficult to draw clear boundaries in acting, “Every time I am given a new role, I will think to myself whether I am acting as her or is she a reflection of me? I can’t tell the difference, because sometimes I take a bit of myself to bring the character to life. Sometimes, the character teaches me something new, so we are sharing knowledge and becoming one.”

Still Wants to Get Married

Focusing on her career, Charmaine has remained single for many years. She is known as a golden bachelorette, while many of her good friends Annie Man (文頌嫻), Janet Chow (周家蔚), Margaret Chung (鍾麗淇), Sherming Yiu (姚樂怡), and Angela Tong (湯盈盈) have already married and become mothers. Towards relationships, Charmaine has always given the same answer, “I’ll leave it up to fate! I want to look for an interesting soul mate.”

Although some celebrities have found partners on dating reality shows, Charmaine declined a previous invitation. As an actress, she has already given up a large amount of her life to the public and hopes to retain a little bit of privacy.

Even though she does not have a partner yet, she still hopes for marriage and believes that she will find Mr. Right one day. She has never felt that she missed the opportunity for marriage, stating that if the relationship did not work out, then it must mean that the person was not right for her. 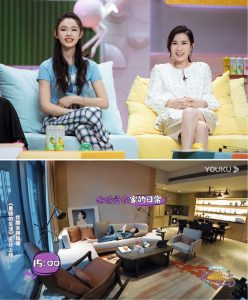 In her early 20s, Charmaine had the opportunity to marry into a rich family. However, she felt she was too young at the time and wanted to gain some life experience after graduating from university. After placing in Miss Hong Kong 1997, she happily accepted all the work opportunities despite the long filming hours.

Believing that as long as she puts in hard work, she will reap rewards one day. Winning multiple acting awards in Hong Kong, Southeast Asia, and China, Charmaine has also attained financial success and lives luxuriously. In variety show Not a Loner <看我的生活>, Charmaine showed off parts of her serviced apartment in Tsim Sha Tsui’s K11 Artus, which costs a staggering $320,000 Hong Kong dollars to rent.

Charmaine Sheh: “No Regrets Having Once Sacrificed Love for My Career”