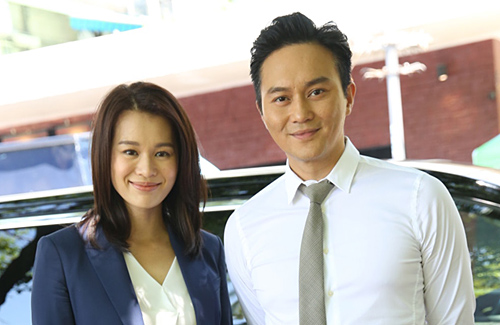 Starring Louis Koo (古天樂), Francis Ng (吳鎮宇), Chilam Cheung (張智霖), Chrissie Chau (周秀娜), and Myolie Wu (胡杏兒), the filming of the action thriller movie, Death Notify <暗黑者>, is coming to an end. Yesterday, Myolie and Chilam were spotted dressed smartly in suits for filming. Chilam will be portraying a mentally unstable character. He revealed in a previous interview that It was difficult for him to get out of character afterwards.

With the temperature climbing in recent days, filming outdoor scenes in layered outfits was excruciating for the artistes. However, such is the life of an actor. Chilam said, “Being an actor is really like playing a joke on yourself. Not only do you suffer physically, but your emotions also go through extreme highs and lows. That’s why I have to treat myself well all the other days!”

However, fortunately for Chilam, he got a break from the heat thanks to a shower scene. “For this scene, I get to take a cold shower. It was so comfortable. A cold shower in the heat of summer is really great. I actually forgot to bring swim shorts to cover myself up with, so I had to go full nude. But don’t worry, with the camera angles, no one will be able to see anything!”

Summer vacation is also right around the corner. After completing filming, Chilam and his wife, Anita Yuen (袁詠儀), will be taking their son, Morton Cheung (張慕童), on vacation to England. Chilam expressed that many children these days prefer to stay at home and play video games or skateboard. The 46-year-old father-of-one, however, thinks otherwise. “Actually, I think it’s really important to go out and see things to broaden your horizon. That is why we try our best to bring our son on trips to stroll through museums or just witness different cultures and traditions.”