Chow Yun Fat is Interested in Filming for TVB Again 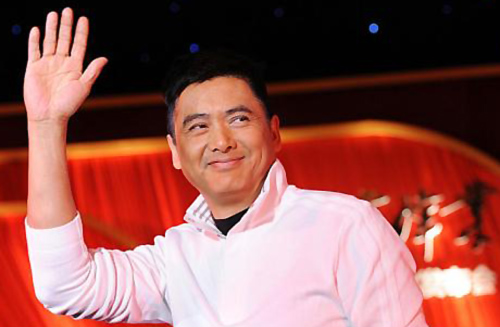 TVB is preparing for the upcoming television war. In 2013, new television stations, CTI, Now TV, and three other local stations will be given the free broadcasting license by the Hong Kong government. In the past year, TVB failed to retain many of their employees and artists after the establishments of CTI and Now TV’s drama studios. CTI has already finished the productions of three dramas, and Now TV is currently in the midst of working on their co-produced epic drama with mainland China.

TVB needs to muster all of their sources to maintain their strong hold in the Hong Kong television industry. It has been confirmed that Eric Tsang (曾志偉) has already successfully brought Andy Lau (劉德華) back to the mother ship. Andy is currently working on the script of a new TVB drama, which will be produced by Eric Tsang. Wong Jing (王晶) also confirmed that he is currently working on an epic drama for TVB that will star Deanie Ip (葉德嫻), Kenneth Ma (馬國明), and Hawick Lau (劉愷威).

However, TVB will not stop there. It has been rumored for weeks that international star, Chow Yun Fat (周潤發), may also return to TVB to film a drama. Although inviting a renowned superstar to film a TVB drama sounds farfetched, Sudden Weekly reported that chances of Chow Yun Fat returning are high. Chow Yun Fat himself also said that he is interested, and urged TVB to send him a script as soon as possible!

An insider revealed, “Many people think that having Fat Gor coming back to film a TVB drama is farfetched, but if he promised to do a local film, then making guest appearances in a drama should not be too difficult.”

According to Eric and Wong Jing’s proposal, Chow Yun Fat will have a lot of freedom in deciding the drama’s genre, storyline, characters, and also costars. Allegedly, Chow Yun Fat tentatively said yes in their preliminary discussion.

Chow Yun Fat recently returned to Hong Kong after completing epic film, The Assassins <铜雀台>. On September 6, Chow Yun Fat was seen driving up to Tai Po in the early morning, planning to go hiking and taking landscape photography. When he saw the reporters following closely behind, he laughed and said, “Aiya, can you guys please stop following me? You’re scaring away all the birds!”

Asked if Eric had requested him to film a TVB drama, Chow Yun Fat’s eyes widened and said, “Really? I don’t know!” When reporters mentioned his rumored meeting with Eric Tsang and Wong Jing, Chow Yun Fat said,  “Really…? We can talk. I am interested. Tell him to send me a script quickly!”

When asked if he would request for an astronomical fee, Chow Yun Fat laughed, “You will have to ask Mrs. Chow for that. I want to see what she thinks first!”

Regarding Chow Yun Fat’s tentative promise in returning to TVB, Eric Tsang said, “Actually, I only briefly mentioned it. Having Andy Lau (劉德華) agree to film for us is a good start. If I can touch one of them, I can touch another. We believe that Fat Gor will agree to return to TVB to help out.” (Have you guys discussed a price?) “We cannot always talk about money. It will hurt our relationship. Money is not the most important factor now. It is about sincerity.”

Eric also confirmed that Andy will film a 30 to 40-episode drama, “We are still finding a leading lady. The script is still in brainstorming mode; Andy is handling this, not me. I want the entire story to focus on Andy. I’m just going to let him come up with the synopsis, and then I will help him out with the smaller details. At this rate, the complete script should be out by the end of the year.”

Jacky Cheung (張學友): When asked if Eric Tsang had asked him to film a drama for him, Jacky smiled and said, “If he is interested in getting me to join, he should hurry! But I still need to read the script first. I am okay with going back to TVB. It will be fun.”

Carina Lau (劉嘉玲): Carina graduated from TVB’s artist training class in 1983. Allegedly, Eric Tsang also asked Carina to return to TVB. Carina told him that she was interested, but would only agree to guest star in several episodes.

Sandra Ng (吳君如): While appearing at a function a few days ago, Sandra said, “Actually, TVB has always been asking me to film for them! I am ready for them.”