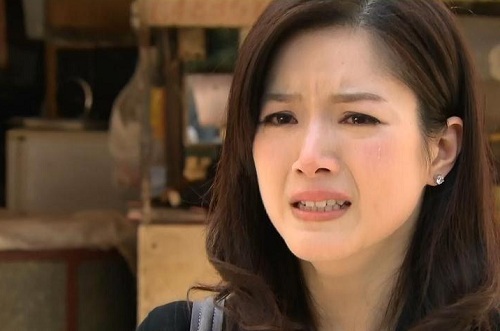 Christine Kuo (苟芸慧) attended a celebratory dinner for TVB hit drama Tiger Cubs <飛虎> yesterday. Christine burst into tears when she was asked recent tabloid reports claiming that she had seduced Michael Tse (謝天華) in a car. Defending her reputation, Christine said that the published photos were from filming a scene for new TVB drama, Justice Attack <法網狙擊>. Christine’s parents in Canada were upset over scandalous report, in which Christine felt unjust and extremely upset.

As Christine is plaqued by scandals one after another, she is being labelled as TVB’s “flirtatious vamp”. Having a curvaceous figure and an outgoing personality, Christine was rumored to have worked her charm on her costars, namely Kevin Cheng (鄭嘉穎), Edwin Siu (蕭正楠), Raymond Cho (曹永廉) and Oscar Leung (梁烈唯). Branded as a “goddess” by many men, Christine is also very popular among the wealthy-second-generation bachelors as well. Earlier, she was spotted with Elva Ni (倪晨曦) attending a yacht party hosted by EEG Chairman, Albert Yeung’s (楊受成) son, Alex Yeung (楊政龍).

East Week claimed that Christine performed a seducing act on Michael Tse while filming, and Michael was allegedly too overwhelmed by her daring actions. Christine and Michael were filming for a scene in Justice Attack in which Christine tried to drag the drunken Michael into the car. Having a western mindset and a bold personality, Christine got into the flirtatious act quickly.

Christine allegedly removed her scarf and revealed her cleavage to Michael. She then reportedly gave him a sultry glance, and unbuttoned his shirt gradually. Shocked by Christine’s daring act, Michael moved into the back seat of the car to escape from her. Christine allegedly continued to advance and rip off Michael’s jacket and continued mesmerizing him.

Christine and Michael reportedly had many “NGs” during the filming. Christine allegedly was constantly reminded by Michael that she had exposed herself accidentally while filming. After filming for the hot scene for over an hour in a car, Laughing Gor’s legs allegedly turned wobbly after he got off the car!

Christine Pretended to Break Up With Joey Law?

For the sake of her career, Christine reportedly pretended to break up with former Mr. Hong Kong participant, Joey Law (罗天宇) and turned their relationship underground. Promoted heavily as the next fadan, TVB allegedly was unhappy with Christine when she openly admitted to dating Joey. She allegedly faked her breakup with Joey in February this year, stating that she wanted to focus on her career.

East Week claimed that even after breaking up with Joey, Christine continued to address Joey’s mother as godmother and even stayed overnight at Joey’s place. Christine allegedly would also deploy Joey’s maid to clean up her house.

Joey denied patching up with Christine, and said “Mommy really takes care of her, and treats her like her own daughter. I am not staying with my mum now, but they will often arrange for a meal together. I have no intention of reconciling with her, but we won’t know what will happen in the future. I will focus on my career first.”

When asked about Christine being branded as TVB’s flirtatious vamp, Joey jumped to her defense, “She is not that kind of person!”

Speaking about her scandalous news with Michael Tse, Christine was emotional, “I have my baseline. Please do not hurt my family. I felt innocent! Because of my job, my family is so unhappy, and I felt terrible about it. The matter will not go away even if I leave or quit my job. I need to face the scandals bravely. I will ask my parents to stay here so that they can understand the nature of my job better.”