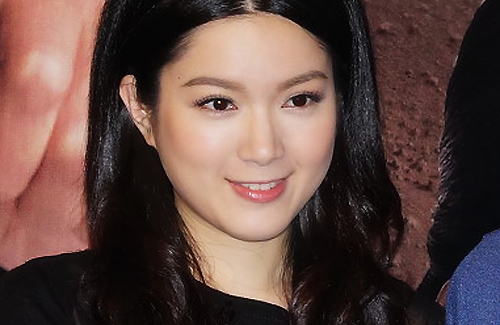 Last Tuesday, Lynn Hung (熊黛林) shockingly announced her breakup with Aaron Kwok (郭富城), whom she has dated for 7 years. Lynn uploaded a photo on her Weibo that showed her pinky finger ring, a gesture interpreted as indicating the end of her relationship. Along with it were the words, “The new gift I give myself, bless myself, starting new on the road….”

It was also revealed that Aaron had promised to marry Lynn, in an attempt to turn around Lynn’s father’s health situation. The wedding was planned for the Maldives in October. Unfortunately, Lynn’s father passed away in January, but the wedding plans were not canceled. Aaron also vowed to marry Lynn if she were to become pregnant.

Christine Kuo (苟芸慧), who has always possessed a good-girl image, is suspected as the intruding third party in Lynn and Aaron’s 7-year relationship. Aaron and Christine shot an MV for the song “Secret Language” <天机密语> last October, in which they had portrayed a couple. Allegedly, the two started to keep in touch since then. According to the insider, Aaron really loves Lynn, but it does not mean that he will not go on dates with other girls.

Facing the rumors, Christine said in tears, “I didn’t do it, it’s not the truth. It feels terrible to have people write about me like this…. Breaking up is their business. I can’t reply on their behalf.”

An insider revealed that Christine was not lying. It is true that she has never been officially dating Aaron. The only thing she is hiding is that Aaron brought Christine to meet with a group of his friends.

Compared to Lynn’s often forced demeanor around Aaron’s friends, Christine’s charm impressed them. While Aaron’s friends praised Christine, Aaron reportedly found Christine to be too chubby and thinks that she should lose a dozen pounds.

Lynn reportedly forced the topic of marriage upon Aaron and failed. Tabloids reported that Christine then walked into their relationship while the couple was in a cold war. Lynn later declared a breakup in hopes that Aaron would soften up to her like in the past, but their relationship terminated in actuality.

On Thursday, Lynn appeared at a function for Rigby and Peller. She looked tired with puffy eyes, and thus reporters asked if she had been crying. She replied, “Cry? Who said that? I didn’t cry last night. I’m okay.” After mentioning that Christine cried due to the accusations of being the third party, Lynn remarked, “I don’t know who should be the one crying!”

When Lynn was asked if she will wish Aaron and Christine well, she replied, “I’m not going to talk nonsense. I don’t know this person.”

An insider revealed, “Lynn is not fond of Christine, and believes that Aaron has feelings for her! You know a woman’s instinct. They can tell the difference between what is just for fun and what is serious. Lynn thinks that Christine is a threat, because she knows that Aaron’s friends have seen Christine as well. At Aaron’s concert, Christine was given the guest spot. At the time, Lynn was in a rage.”

Aaron: “Loving Someone Doesn’t Mean You’ll Be Together!”

It was not the first time that Lynn and Aaron’s love quarrels were aired before the public. On Valentine’s Day last year, Lynn publicly announced receiving a diamond necklace as a gift, but Aaron denied that he was the giver. Lynn became angry and threatened a breakup. Aaron later won back Lynn’s heart by openly declaring Lynn as his girlfriend.

Appearing at a promotional event yesterday, Aaron was asked once again whether his relationship had ended due to a third party involvement. Aaron denied this and hinted that incompatibility of their personalities may have been the reason.

Aaron said, “Loving someone doesn’t mean that you will end up together until old age. On the other hand, letting go may allow the other person to find a better match. I hope everyone can give us more space. We should continue to focus on work. Love is destined by the heavens.”

138 comments to Christine Kuo Went on Date With Aaron Kwok?