Crystal Fung Waiting to Be a Doctor’s Wife 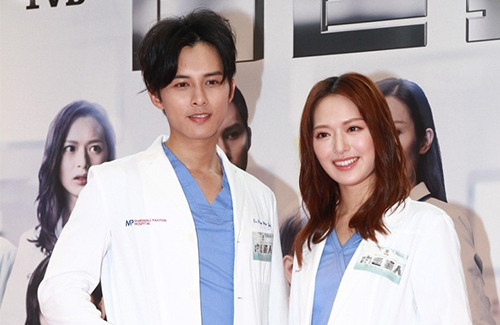 Costars Crystal Fung (馮盈盈) and Matthew Ho (何廣沛) caught up with the press last weekend to promote their TVB drama Big White Duel <白色強人>, a medical drama series which also stars Roger Kwok (郭晉安) and Kenneth Ma (馬國明). Crystal, who just turned 25, said she would celebrate her birthday by tuning into the first episode with her boyfriend.

Crystal’s boyfriend, who is not of the industry, recently passed his licensing exam. Crystal, who plays a doctor in the series, was asked if she was prepared to be the wife of a doctor in real life. The 25-year-old joked, “Not until the show reaches 40 points!”

Matthew retorted, “30 points was already a lot of work for me, and you’re saying 40 points? You really don’t want to get married, do you?”

Crystal gave Matthew her first ever onscreen kiss in Big White Duel. Pointing out that she already kissed Mat Yeung (楊明) in last year’s Apple-colada <果欄中的江湖大嫂>, Crystal said, “That didn’t count. It was camera angles. This time, I really kissed Matthew. I had to be the one to take the initiative too, but Matthew was very caring and took care of me. He made sure to put on extra chapstick.”

While Big White Duel has been receiving positive reviews, many viewers criticized Crystal for her unclear speech and “lazy” accent. She said, “It’s a good thing. That means people are closely monitoring my performance. I’m working on correcting it.”