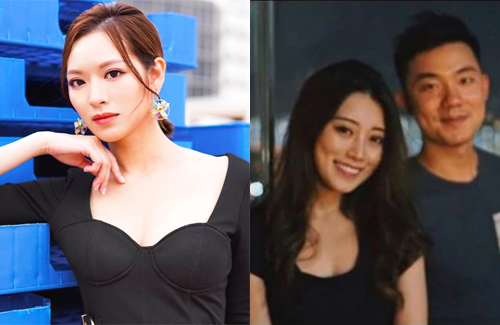 Both Crystal and her ex-boyfriend have moved on after their relationship ended.

Since Crystal Fung (馮盈盈) broke up last year with her doctor boyfriend of four years Martin Chung (鍾文浩), they stayed friends and even met up for a meal on Valentine’s day. However, the former couple seemed to have found new romantic interests respectively, with recent rumors swirling that Martin is tying the knot.

It was said that Martin started dating three months after his split with Crystal. Recently, he shared a photo on his social media of himself with an attractive, long-haired lady, and quoted lyrics to Eason Chan’s (陳奕迅) song “Happy Ferris Wheel” <幸福摩天輪>. Seeming to show off his newfound happiness, his post led netizens to leave their congratulatory blessings.

At the same time, the press discovered a new record of someone with the same Chinese name as Martin on the official marriage registry. Putting two and two together, news spread that Martin may have tied the knot with his new girlfriend. However, Martin clarified that he did not get married, and it was just a coincidence that someone shares the same name.

Crystal Had Helped Pay for Down Payment of Apartment

Before winning Miss Hong Kong 2016, Crystal was already dating Martin and even discussed marriage plans at one point. Martin had also bought an apartment in Ho Man Tin, with Crystal helping to pay off the unit’s down payment with her own savings and not minding the fact that only Martin’s name was on the property deed.

Crystal had claimed then that chipping in to help pay for part of the down payment was her responsibility as a girlfriend, leading the media to label her as a “perfect girlfriend.” After their breakup, Crystal rented the unit out and looked for another residence to stay. She has yet to respond to reporters who reached her for comments.

On the other hand, the 26-year-old also has been active in the romantic circle since her breakup, with her rumors with co-host Leonard Cheng (鄭衍峰) being the most high-profile. She was later spilled to have attended a luxurious yacht party hosted by Arnaldo Ho (何猷亨), son of the late casino magnate Stanley Ho (何鴻燊).