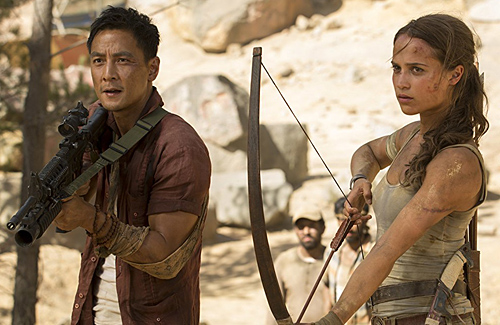 Opening on March 16 in the United States, Tomb Raider  is a re-boot of the classic film franchise. Daniel Wu (吳彥祖) is in a major supporting role as  Lu Ren, a ship captain who helps Lara Craft (portrayed by Alicia Vikander) search for her father.

A fixture in 1990s Hong Kong films, Daniel Wu has shifted his career to Hollywood in recent years. After starring in AMC television series Into the Badlands, in which he also served as executive producer, Daniel has appeared in Hollywood films, Warcraft and Geostorm. Although known for his action roles, Daniel said that he leaves most of the action to Alicia Vikander in Tomb Raider.

Looking back at Chinese artistes in Hollywood cinema, there have been notable cases where they were featured in prominent roles although they portrayed antagonists. Prior to Daniel being cast, many fans remember Simon Yam (任達華) in one of the Tomb Raider sequels, where as a gang leader, he fought against Angelina Jolie for the special orb.

Jet Li (李連杰) debuted in Hollywood in the blockbuster, Lethal Weapons 4, but was cast as a member of the triad who killed many people in the movie. Once again where Chinese actors were type-cast for villains, Chow Yun Fat (周潤發) played a cunning pirate lord in Pirate’s of the Caribbean: At World’s End.

Although many fans were unhappy that some of Hong Kong’s biggest stars were cast as bad guys in previous Hollywood movies, perhaps Daniel’s character in Tomb Raider will allow Chinese actors to gain the well-deserved recognition. Tomb Raider promises a brand-new and refreshing spin on the traditional classic 17 years ago.