The tall and handsome Dickson Yu (余德丞) is no stranger to dating rumors, as he’s been in the rumor mill with Sisley Choi (蔡思貝) for more than a year. Though their alleged romance is not confirmed, their regular couple appearances at work fuel the allegations. However, not too long ago, the media caught wind of the 30-year-old Dickson meeting up with Chrissie Chau (周秀娜). Though Chrissie and Dickson denied the dating reports, Sisley decided to move on – she is speculated to be seeing Dickson’s good friend Hubert Wu (胡鴻鈞) as of late. Just as everyone thought Dickson and Chrissie is a sure item, reporters spotted Dickson with a different woman.

He was caught meeting up with someone who resembles Kitty Yuen (阮小儀), and the woman is reportedly not in the entertainment industry. His mom was also present at the time, but Dickson met up with the woman alone on Christmas Eve. Their relationship must not be simple since they purposely went into the movie theater separately.

After the movie, Dickson kept his head low and played on his phone the whole time. When there were more people around them, he distanced himself from his lady friend and pretended not to know her. Dickson went to the bathroom first before meeting up with her at the parking lot.

When Dickson was hospitalized earlier, it was rumored that Dickson has a girlfriend from outside the industry. Perhaps the woman he went on a date with is the said girlfriend.

However, Dickson was also spotted on a movie date with Chrissie recently. He even celebrated her belated 30th birthday with Mayao Ma (馬天佑) and shared a photo of the celebration online. 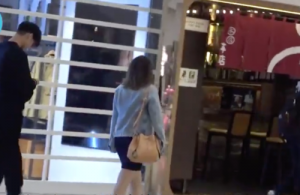 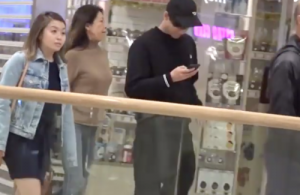