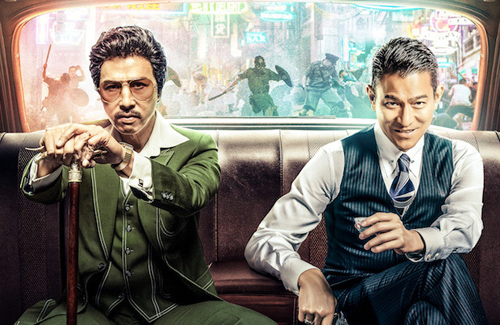 Despite never having worked together, Andy and Donnie have followed each other’s news. Thoroughly enjoying working with Andy, Donnie said, “In the last 35 years, I’ve always thought that Lee Rock was very handsome. But now that I’ve seen him in person, I’ve come to realize that he is indeed very good looking.”

Upon hearing this, Andy laughed, “I did change though – I became even better looking!”

Andy said Donnie has a breakthrough role in the film, “I think Donnie really has a chance to win the Best Actor award. I’ve actually talked about this at my company many times already. During this production, I trust that everyone was able to see Donnie’s changes and his dedication. That alone is enough for both a nomination and the actual award.”

Besides Donnie, who dropped his Ip-Man image to take on the challenges of playing a drug lor, director Wong Jing is also hoping to make a breakthrough with Chasing the Dragon. Known for his crass and over-the-top films, Wong Jing’s last film From Vegas to Macau 3 <賭城風雲III> was criticized for its weak script despite the star-studded cast.