The international success of the Ip Man <葉問> film franchise has propelled the careers of its main star, Donnie Yen (甄子丹), as well as many of the supporting actors. The films, which were initially intended to be a trilogy, is instead going to be a four-part series. Ip Man 4: The Finale <葉問4：完結篇>, which open in Asia, will be the last of the film franchise and also Donnie’s last kung fu movie. 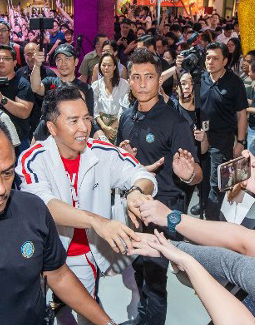 Last week, Donnie and his wife Cissy Wang (汪詩詩) traveled to Singapore and Malaysia to promote the film at the original “Ip Man Mansion” filming location. In Singapore, the megastar attracted many fans, including Singapore’s Deputy Prime Minister and Minister of Finance, Heng Swee Keat, who stopped by to reminisce some of the classic scenes filmed there. Donnie expressed, “I am very touched. Everyone was so passionate and cheering loudly. One of the most surprising things is that the Deputy Prime Minister also came to take a look around. I had the chance to meet him!”

After three days in Singapore, Donnie and Cissy traveled to Malaysia to continue their promotional tour. There, they met up with the film’s producer Raymond Wong (黃百鳴), screenwriter Edmond Wong (黃子桓), and fellow actor Danny Chan (陳國坤). The promotional event was held at the renowned and prestigious Petronas Twin Towers, which rarely allowed entertainment events to be held there. Donnie became the first Chinese actor to be able to hold a function there.

When Ip Man 3 premiered in 2015, it was the highest grossing Chinese film in Malaysian history. When asked whether they hope the fourth installment will surpass its predecessor, Raymond and Donnie both shared the same sentiment and voiced, “Just do our best! It’s not a numbers game. We will leave everything to fate.”