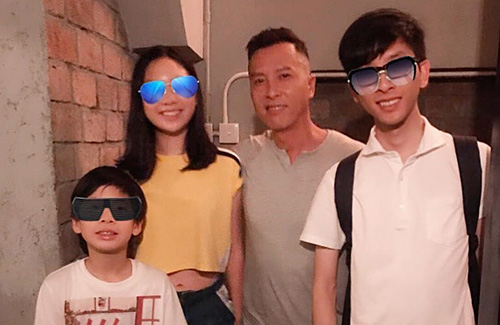 Above: Donnie Yen with his three children.

Married to Cecilia Wang (汪詩詩) since 2003, Donnie Yen (甄子丹) has often showed off his love for his current wife and two children through social media. However, this Father’s Day, Donnie surprised fans and shared a lovely group photo of his two children, Jasmine and James, as well as his oldest son from his first marriage.

While Donnie’s 23-year-old son, Jeff, from his previous marriage with Jowan Leung (梁靜慈) was no secret, Donnie rarely gets to see his son due to his divorce and rarely talks about him in public. Since Donnie never shared any pictures of Jeff, the group photo of his three children came as a shock to fans. Although Donnie photoshopped sunglasses onto his children, many noticed the strong resemblance Jeff had to him. Donnie captioned the photo, “I’m the luckiest father in the world!” 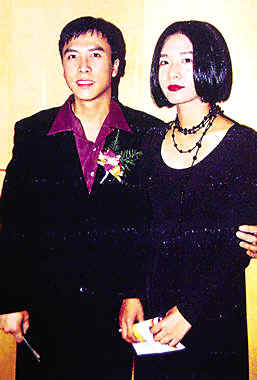 In everyone’s eyes, Donnie is the perfect husband and father, but not many recall his divorce with his first wife back in the early 1990s. Getting married after less than a year of dating, Donnie and his ex-wife went splitsville and were not on great terms. Only realizing that she was pregnant with Jeff after the divorce, Jowan decided to raise the child as a single mother.

Although Donnie has provided alimony since the birth of his son, his efforts of wanting to meet Jeff was met with nothing but broken promises. His ex-wife would often go back on her words and not let the father-son duo meet when they were younger, resulting in Donnie having to go through his lawyer every time he wanted to see Jeff. Hopefully now that Jeff is an adult, the two will not have to take the legal route just to spend some quality father-son time.