After years of filming B-grade movies and unmemorable television dramas, Ethan Ruan (阮經天) is finally seeing a revival in his career.

The Taiwanese actor, who shot to fame in 2008 after starring in the idol drama Fated to Love You <命中注定我愛你>, was once considered one of Asia’s biggest stars in the late 2000’s. Following his big break in Fated to Love You, the actor then starred in the 2010 film Monga <艋舺>, in which he won Best Leading Actor at the Golden Horse Awards.

However, the actor’s career stagnated after dating fellow actress Tiffany Hsu (許瑋甯), and his image took a blow after their split, when it was revealed that Ethan had cheated on Tiffany several times during their relationship. Ethan attempted a new in Mainland China, which was met with mediocre results. 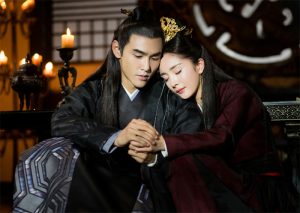 Until the actor got the opportunity to star in Yang Mi’s (楊冪) Legend of Fuyao <扶搖>. According to reports, Ethan lowered his asking price to 3 million yuan in order to be compete for the drama’s lead role. Upon realizing that it was Yang Mi who would be his costar, Ethan said, “I haven’t filmed a drama in a while, but after hearing that it would be Mimi, I immediately accepted the opportunity!”

Legend of Fuyao took five months to complete. An action-packed story, Ethan was involved with many stunts throughout the show – one, in particular, was an intricate action scene with Yang Mi in a bath. Reportedly, the scene was so physically demanding that Ethan ended up passing out several times.